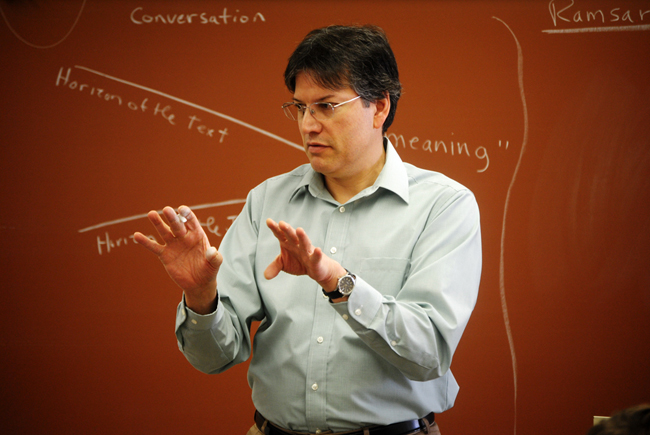 Rollin Ramsaran studied in the Boston area for several years before joining Emmanuel in 1994. He holds the Ph.D. in New Testament and Christian Origins from Boston University Graduate School of Arts and Sciences; a M.A.in Theology from Fuller Theological Seminary (in conjunction with the Westwood Christian Foundation); and a B.A. in Bible and Preaching in America from Pacific Christian College. He has experience in youth ministry, church planting, pulpit ministry, and interim ministry in various communities in California, Massachusetts, and upper east Tennessee.

Dr. Ramsaran’s academic work focuses especially on the moral teaching and reasoning of the apostle Paul and on the role of Jesus in the emergence of the first-century churches. He sees studies in these areas as a foundation for church renewal in our own time. He has a special interest in Greco-Roman social-political history, literature, and rhetoric as important sources of insight for interpreting the New Testament writings. His current research centers on orality, performance criticism, and storytelling. Dr. Ramsaran has authored Liberating Words: Paul’s Use of Rhetorical Maxims in I Corinthians 1–10. In addition, he has written substantial pieces in various edited volumes, articles in Catholic Biblical Quarterly and Leaven, and numerous book reviews. He is active in the Society of Biblical Literature and the Network of Biblical Storytellers.

Dr. Ramsaran held the posts of Lecturer in Religious Studies at Boston University and Instructor in Religion at the University of Massachusetts at Boston. He was a participant in 1993–94 Maritimes/New England AAR/Lilly Teaching Workshop in Religion; scholar-in-residence at the Boston University School of Theology (2000-01); and traveled with the Middle East Travel Seminar (2004). He is active in the Association of Theological Schools where he joins with other theological school administrators in actively sharing in implementing and sharing best practices for robust theological education for the next wave of 21st century ministerial leaders.  Dr. Ramsaran previously served as Emmanuel’s Dean from 2008 to 2010, prior to returning to that role in 2014.

Rollin enjoys trying to keep in shape through hiking, walking and basketball.  He and his wife, Michelle, attend and serve at Grandview Christian Church in Johnson City, TN.  Their son, Josh, and daughter-in-law, Abi, also live and work in Johnson City.  And their daughter, Arianna, attends Gordon College in Wenham, MA.