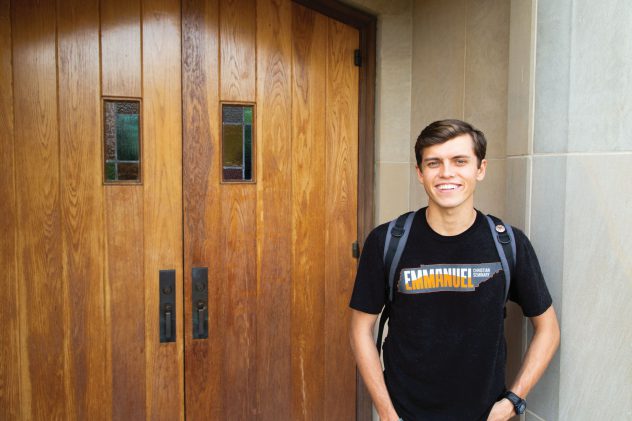 “During my second semester as a freshman, I knew God was calling me to a different kind of ministry,” reflected Guy. “While such a paradigm shift can be jarring, it was the right move.”

Though he initially felt hesitant about this calling, Guy participated in several ministry internships that helped affirm his decision. During his sophomore year, Guy interned at Mountain Christian Church in Joppa, Maryland, via Milligan’s Semester in Ministry program. At Mountain, Guy began to consider seminary, and he appreciates the support and guidance he received from Emmanuel graduate and Mountain’s lead pastor Ben Cachiaras (MDiv ’92).

“It was Ben who told me ‘you have the ability to dig your well deep,’” recounted Guy. “It was a really poetic way of affirming that I could thrive in seminary. As much as that was Ben’s voice, I also know it was God’s voice, through his church, telling me to pursue seminary.”

As a senior, Guy decided to enter Pepperdine University’s Next Gen Preacher Search, and this competition solidified Guy’s intent to pursue seminary.

The Next Gen Preacher Search is a national competition that allows high school and college students interested in preaching to submit a five-minute video of a sermon for review. Semi-finalists are selected to travel to Pepperdine’s campus for the next round.

Guy did not plan to enter the competition, but at the last minute, he decided to submit a sermon he had prepared for one of his classes. To his surprise, he was chosen as a semi-finalist.

In February 2019, Guy and 19 other students traveled to Pepperdine. There, the students spent two days attending workshops to fine tune a new five-minute sermon. Guy worked with seven communications instructors and well-known preachers, like Jeff Walling.

“It felt absolutely amazing to be around people who so fervently believed in the power of preaching,” he stated. “I was around amazing communicators who were driven by the call of Jesus to preach the Good News.”

At the end of the two days, each semi-finalist stepped onto the stage in Pepperdine’s chapel to record their sermon. These recorded sermons were judged by pastors around the country.

A month later, Guy learned that he had been selected as one of four finalists, the winners of the competition. “It blew my mind to be selected,” stated Guy. “This competition strengthened my conviction that my next steps included seminary.”

Shortly after participating in the Next Gen competition, Guy also received news that he had been awarded Emmanuel Christian Seminary at Milligan’s John Robert Neely, Jr. Scholarship.

As a current Emmanuel student, Guy appreciates the preparation he received at Milligan. Guy enrolled in several seminary courses at Emmanuel as an undergraduate, and he credits his academic advisor, Dr. Jeff Miller, with preparing him for the rigors of seminary life.

“Academically, Miller knew what I could handle, but he has challenged me this fall by placing me in classes where I could use the knowledge I garnered in undergrad,” said Guy.

During his first semester of seminary, Guy is thankful for the community he is building with his cohort. Several of his peers are already family, literally. Guy began seminary in the same cohort as his brother, Sam, and his sister-in-law, Laurel.

“The three of us have grown significantly closer as we are formed by the seminary experience together,” reflected Guy. “There is a reason God has called the three of us here together. I’m not sure any of us fully know what the answer is, but I’m grateful we’ll figure it out together.”