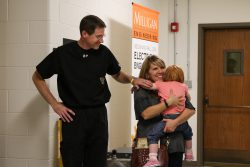 Melanie and Christopher Mathews are all smiles with their 2-year-old, AnnaGrace, who was given a specially-modified toy Jeep. 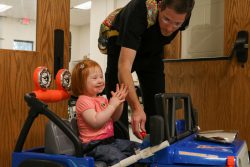 AnnaGrace Mathews, a 2-year-old from Kingsport, Tennessee, was thrilled to try out her new specially-modified toy Jeep on Tuesday in Milligan College’s engineering labs. 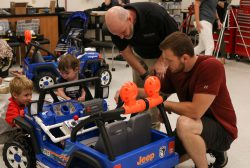 MILLIGAN COLLEGE, Tenn. (October 11, 2017) — AnnaGrace Mathews, a 2-year-old from Kingsport, Tennessee, was thrilled to try out her new specially-modified toy Jeep on Tuesday in Milligan College’s engineering labs. Mathews’ Jeep was specifically modified to help her to be able to play and move independently.

This is the third project for Go Baby Go Appalachia, a program of local nonprofit AdaptoPlay, which is a collaboration of Milligan engineering, East Tennessee State University Public Health and ETSU Physical Therapy department.

Dr. Greg Harrell, director of Milligan’s engineering program, along with a team of Milligan engineering students, helped make the physical modifications to the Jeeps given to three children with special needs.

“So many children with special needs have to sit and watch the world go by around them,” said Harrell, who in addition to working at Milligan, also serves as a lead technical advisor for the United Nations and conducts energy assessments and training around the world. “However, a modified vehicle allows them to be in the fun, be a part of the action and experience the learning and socialization that is crucial to development and growth.”

Among the Jeep’s electrical and mechanical improvements, the team replaced the steering wheel with a joystick, similar to one found on an arcade video game machine, allowing the children to steer with minimal movement. The car’s electrical system was modified to allow the joystick to control the rear-wheels for steering, forward and reverse movement.

“The Jeep is very user friendly for her,” said AnnaGrace’s mother, Melanie. “She was all smiles trying to figure out the controls.”

To help turning, the engineering team added a single caster wheel in the front that allows effortless turning in any direction. To increase safety, a harness system made from PVC pipe and foam padding was implemented. Parents also have a kill switch to be able to turn the Jeep off at any time.

“Now she can get outside and play and explore like other children,” said Mathews. “We’re very thankful for this.”