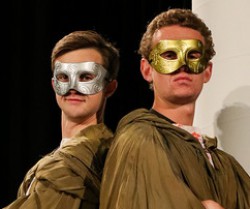 Sophomore Colby McKeehan, of Johnson City, Tennessee, and freshman Drew Hawkins, Brooklet, Georgia, will star as “The Twins” in Milligan's “The Menaechmi.”

A Roman play considered to be Plautus’ greatest comedy, “The Menaechmi” is a hilarious story full of twists and turns. The story features a vast array of traditional Roman stock characters, including an old man obsessed with money, a rebellious young man, a clever slave, a shrewish wife and a cowardly soldier.

“The production is a fast-paced case of mistaken identity which constantly confuses the characters onstage but contributes to the hilarity of the play for the audience,” according to the show’s director, Richard Major, professor of theatre. “This is a wonderful crowd-pleaser for audiences of all ages.”