‘Off to the races’ 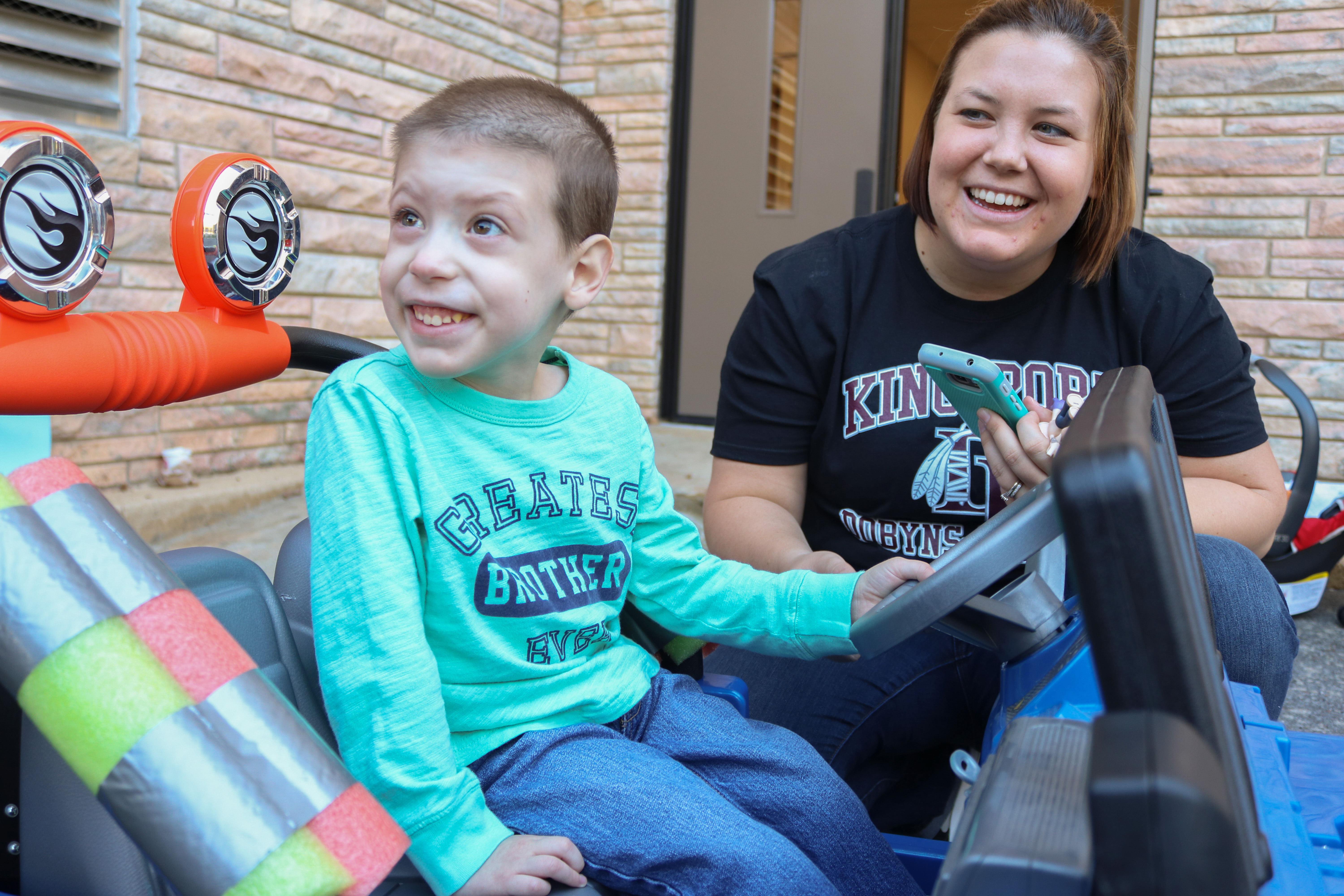 MILLIGAN COLLEGE, Tenn. (Nov. 10, 2016) – Unlike most kids, 4-year-old Layton Middleton doesn’t have the physical strength to walk and is bound to a wheelchair because of a condition known as spina bifida, a birth defect in which a baby’s spinal cord fails to develop properly.

However, Milligan College’s engineering students found a solution to give Middleton independent mobility for the first time—and a chance to have fun like other kids his age—by modifying a Fisher-Price Power Wheels Jeep from the inside out, just for him.

“The vehicle is totally modified, yet it still looked like any Jeep,” said Dr. Greg Harrell, director of Milligan’s new engineering program, which started this fall offering mechanical and electrical engineering majors. Because Middleton doesn’t have the strength in his arms or legs to turn the steering wheels or push the foot pedals, the Jeep had to be revamped with new steering and safety mechanisms.

“Through projects like this, Milligan engineering students are getting exposed to real-world engineering problem solving—and the stakes are extremely high because we all want Layton to have the best Jeep imaginable,” said Harrell.

This was the first project for “GoBabyGo Appalachia,” under a local nonprofit called “Adaptoplay.” The team consists of Milligan’s engineering and occupational therapy areas, East Tennessee State University (ETSU) Physical Therapy, ETSU Public Health Department, Talkback Pediatric Therapy, and community therapists. The group’s mission is to help kids with special needs become mobile. For more information, contact gobabygo@adaptoplay.org. “GoBabyGo” first launched at the University of Delaware in 2006 and has since spread to different regions.

Among the Jeep’s electrical and mechanical improvements, the team replaced the steering wheel with a joystick, similar to one found on an arcade video game machine, allowing Middleton to steer the Jeep with minimal movement. The car’s electrical system was modified to allow the joystick to control the rear-wheels for steering, forward and reverse movement.

To help turning, they added a single caster wheel in the front that allowed Middleton to move effortlessly in any direction at Middleton’s command. To increase safety, the team added a harness system made from PVC pipe and foam padding.

Harrell said this project is only the beginning.

“So many children with special needs have to sit and watch the world go by around them,” said Harrell, who in addition to working at Milligan, also serves as the lead technical advisor for the United Nations and conducts energy assessments and training around the world. “However, a modified vehicle allows them to be in the fun, be a part of the action and experience the learning and socialization that is crucial to development and growth.”

Milligan engineering also worked in collaboration with the Knoxville-based “GoBabyGo Rocky Top” led by Pete Capell, who serves as the group’s project director.

He said that kids with physical disabilities often become reliant on others, even for things they can do themselves; but by giving children with special needs better mobility, through projects like “GoBabyGo,” they are empowered. It helps normalize their interactions with everyone else, allowing them to learn through experiences.

“These kinds of projects prevent learned helplessness,” said Capell. “It helps put them in control, engaging more with the world around them. The more they can interact with others the more they improve their socialization.”

“Of course, I don’t want Layton to be hurt, but this is going to give him the chance to be mobile in the yard, at the park and to interact with his peers,” she said. “I’m excited to see him play like a normal child.”

Jay Wheeler, who is majoring in mechanical engineering at Milligan and helped with the project, said it was an emotional experience to watch Middleton move on his own.

“It was a blessing to see a child experience this, taking a big step forward,” said Wheeler, who’s from Jonesborough. He hopes to continue working on projects like these, even after graduation from Milligan’s program. “It was very rewarding to apply our problem-solving skills and allow Layton to do something the rest of the world thought he couldn’t do.”

Capell said the success of the project was clear the moment Middleton pushed the joystick and drove around the parking lot.

“He was off to the races,” said Capell. “He had a cheesy grin the whole time.