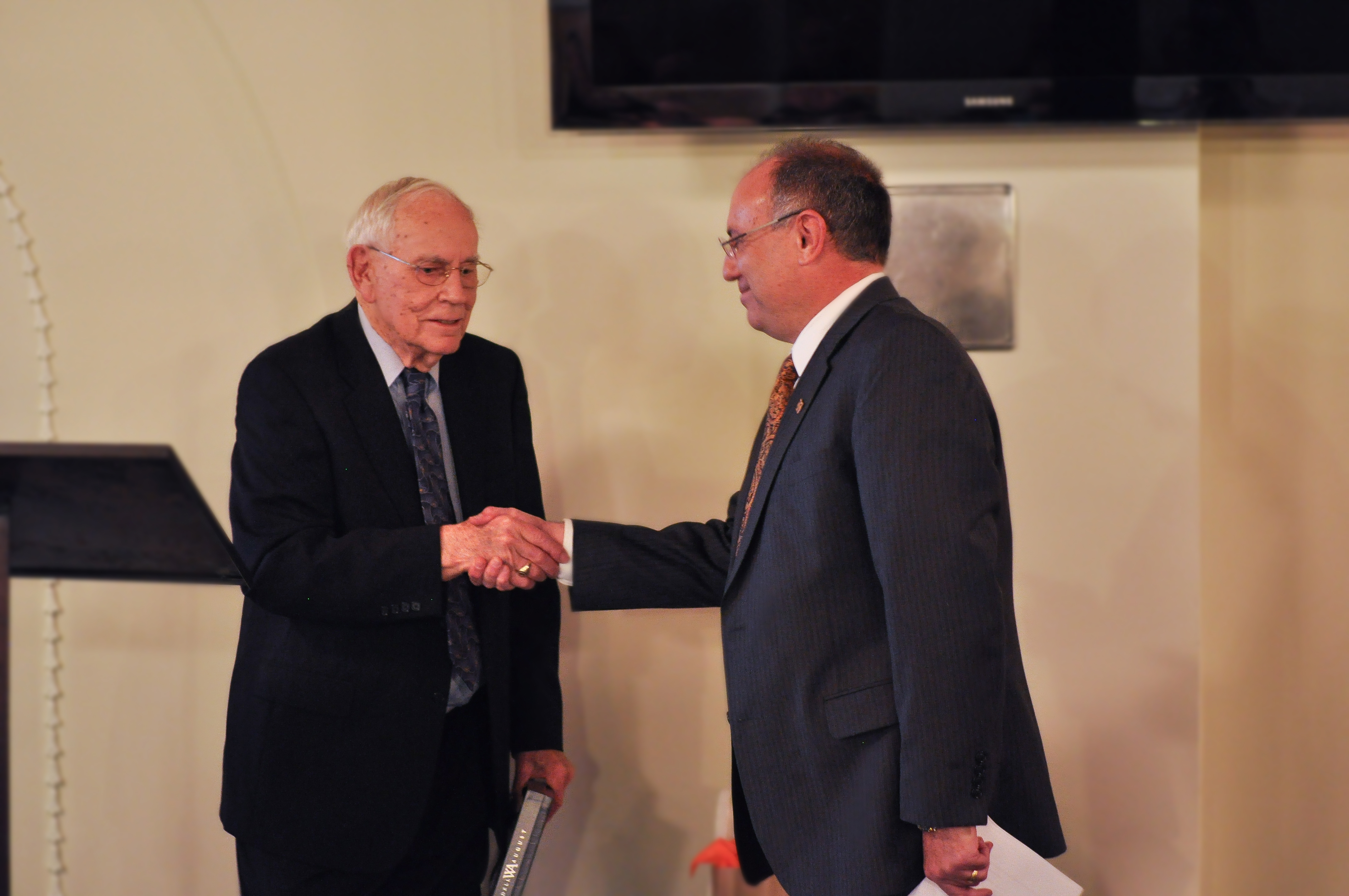 MILLIGAN COLLEGE, Tenn. (Feb. 26, 2016) – Milligan College and Eastman honored Dr. Robert “Bob” Hart, who was part of Milligan’s V-12 program in 1945 and former Tennessee Eastman President, at a dinner held Thursday evening, Feb. 25, at BANQ in Kingsport, Tennessee. In addition to honoring Hart, the “Celebrate Engineering” dinner recognized the significant impact of the engineering profession both regionally and globally.

The evening included remarks from Milligan’s Engineering Programs Director Dr. Greg Harrell and the naming of the “Robert C. Hart Engineering Scholarship,” which will support students enrolling in Milligan’s new mechanical and electrical engineering majors, launching this fall. The program recently received approval from the college’s regional accrediting body, the Southern Association of Colleges and Schools Commission on Colleges (SACSCOC).

“We are incredibly grateful for the many contributions Eastman and Bob Hart have made to the engineering profession and for their support of Milligan’s new engineering program,” said Milligan President Dr. Bill Greer. “In creating the region’s first mechanical and electrical engineering programs, Milligan’s goal from the very beginning has been to prepare well-rounded engineers for leadership and innovation in all sectors of the economy who have a heart to serve.”

A native of Piney Flats, Tennessee, Hart studied a “pre-engineering” curriculum at Milligan during the college’s Navy V-12 era, when Milligan was converted into a WWII officer training program between 1943 and 1945.

Hart’s 40-year career at Eastman began in 1950 when he joined the engineering division. He was later named president of Tennessee Eastman Company and Holston Defense Corp. before being named senior vice president of administration for Eastman Chemical Company in 1989. He retired from Eastman in 1991 and received an honorary doctorate in engineering science from Milligan in 1993. Several current and former Eastman executives were in attendance to honor Hart.

“I am humbled, honored, surprised and very grateful by this recognition,” said Hart, who attended the event with his family. “I’m excited about the prospect of Milligan having an engineering program—that’s absolutely wonderful. Milligan engineering has a nice ring to it, and I wish you all the success in the world.”

The Robert C. Hart Engineering Scholarship is a $2,000 per year scholarship, which can be combined with other merit and need-based aid, for a total scholarship of $10,000-$18,000. Students also may be eligible for state and federal aid. An applicant must be a new student enrolling in fall 2016 and have a 3.5 high school GPA and 25 ACT/1130 SAT. The scholarship is renewable for a total of four years if the student successfully progresses through the engineering major benchmarks.

There are a limited number of engineering scholarships, as funds are available; students are encouraged to apply early and must declare engineering as their major when applying.

“Whether designing modern technology or meeting the basic needs of the world’s underserved, a Milligan engineering grad will have a unique preparation of sound engineering theory and application, grounded in a liberal arts curriculum, all taught from a Christian worldview,” said Harrell. “The Hart Scholarship is appropriately named for someone whose career exemplifies what is central to our engineering curriculum.”

Milligan’s engineering program has gained the praise of major industry players such as Eastman, TPI Corporation, and Nuclear Fuel Services who have offered support through co-op and internship opportunities, curricular input, scholarships and program funding. All have expressed interest in hiring Milligan engineering grads.

Additionally, Milligan will seek program accreditation from the Accreditation Board for Engineering and Technology (ABET) as students reach the appropriate milestones. Accordingly, the college’s program has been designed to meet ABET standards. More information on ABET accreditation can be found on the ABET web site at www.abet.org.

To apply, contact the Admissions Office 423.461.8700 or email admission@milligan.edu.

CategoriesArticles
Tagsengineering
Posted by on February 26, 2016.