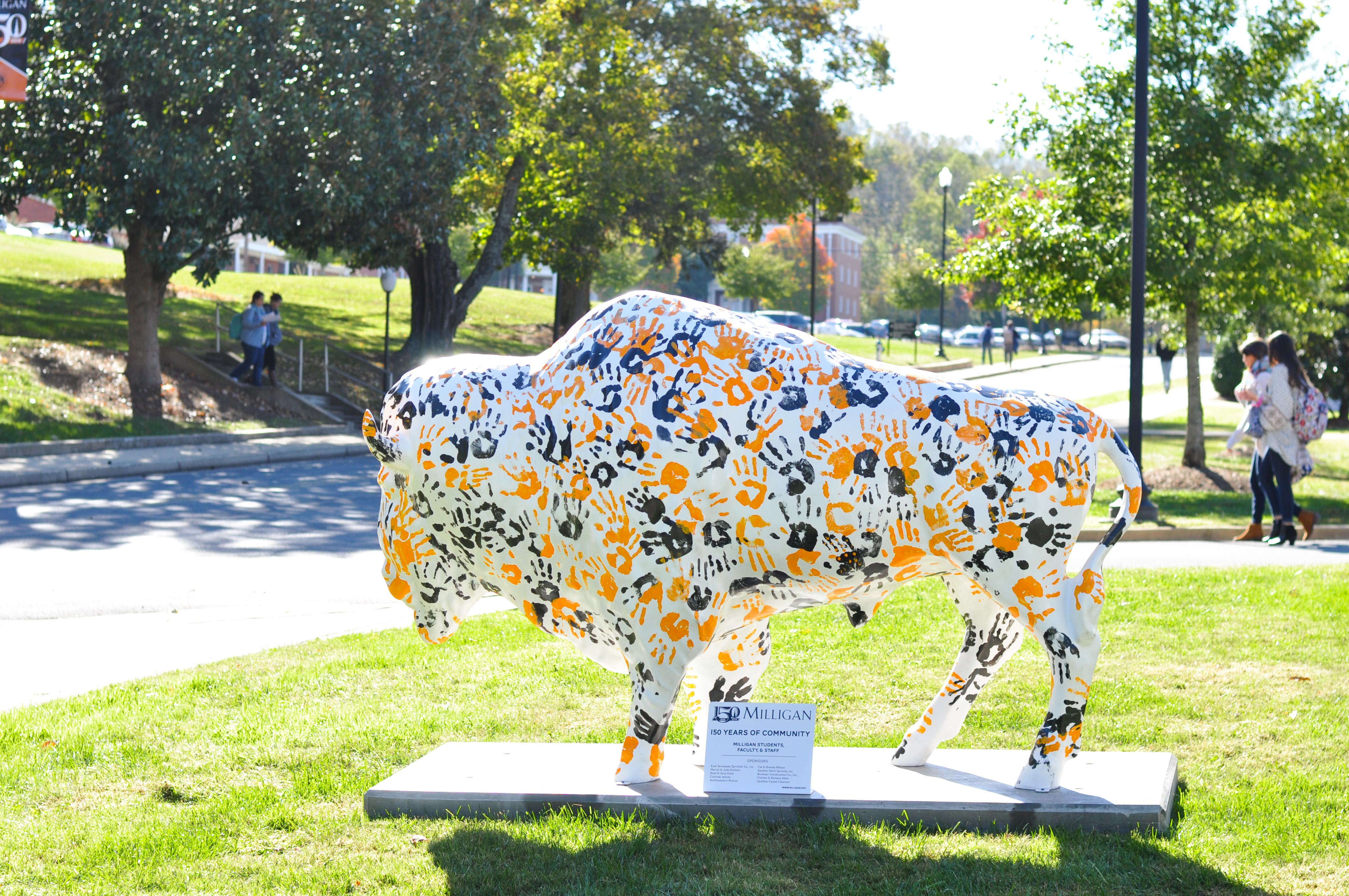 Because the college is located on the banks of Buffalo Creek, in the shadow of Buffalo Mountain—and originally called Buffalo Male and Female Institute, which met at Buffalo Creek Christian Church—the buffalo emerged as the logical mascot of Milligan in the early 1900s.

The art project was the brainchild of former Milligan First Lady Clarinda Jeanes, wife of late President Don Jeanes. Her inspiration for the project came from visiting Denver, Colorado. Since the city’s professional football team, the Denver Broncos, features a bronco mascot, the downtown area is decorated with sculptures of wild, untamed horses.

They will “graze” in Johnson City for six months and later move to the Elizabethton area for the remainder of Milligan’s 150th celebration in 2016. The sesquicentennial celebration kicks off this weekend during the college’s Homecoming celebration.

Each artist had six weeks to develop his or her own concept and complete the buffalo projects: “Abstraction Over American Bison” was created by Nick Blosser, Milligan assistant professor of art; “Sweeter Than Honey,” by Kristin Colson, a 2001 Milligan graduate; “Buffalo Mountain,” by Karen Dorr, mother of 1998 alum Christopher Dorr; “Fruity Pebbles,” by V. Kelsey Ellis, a 2012 graduate; and “Buffalove,” by Cortny Eorgan, daughter of 1970 alum Cal Wilson.

One buffalo, scheduled to remain on Milligan’s campus until the celebration concludes next year, is titled “150 Years of Community” and includes handprints of the college’s students, faculty and staff.

Blosser said his inspiration came from the unique form of the buffalo itself.

“My process to create the work was to simply consider its shape as an inspiration to respond to with abstract colors, patterns and markings that hopefully complimented the form,” said Blosser, who has been teaching at Milligan for over 20 years. His buffalo is located at the Johnson City Mall.

“Fruity Pebbles” will be on display at the library and was created by Ellis using painted heaps of heavy rocks and sand. She named the work after seeing the end result, which looked like Fruity Pebbles cereal. Ellis said using unconventional materials made the process more difficult, but more rewarding. “I have to discover solutions myself, but that’s also one of the most exciting parts of the process,” said Ellis.

Eorgan created a minimal black and white design for her work. “I had an idea to show the struggle between light and dark in all of us,” she said, whose buffalo is located at First Christian Church.

Dorr painted Buffalo Mountain on her fiberglass buffalo with acrylic paint because the mountain has been such a special place in her life. “Given it’s prominence in our area, there haven’t been many days I haven’t driven past it and appreciated its beauty,” said Dorr, a retired school teacher, whose creation will soon be at Niswonger.
Colson was inspired to create the honeycomb look of “Sweeter Than Honey” because of the hexagonal pattern and because her experience at Milligan was, in fact, “sweeter than honey.” It is located, appropriately, at Tupelo Honey Café.