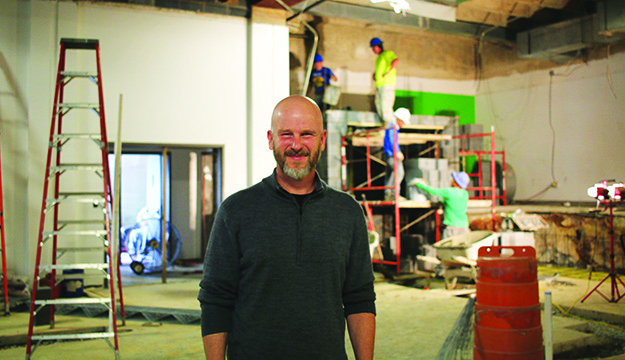 Two stories below Greg Harrell’s makeshift office, workers are busily transforming the high-ceilinged ground floor of a seminary into a mechanical and electrical engineering laboratory. Biblical scholars pass through the halls in this building on a hill, from which Emmanuel Christian Seminary, now part of Milligan College, has sent God’s emissaries throughout the world for five decades. An engineer whose career has spanned industrial work, academics and consulting, Harrell has the responsibility for leading another sending effort from this building – this one, of Christian engineers with a liberal arts education who are ready to serve both their employers and the world. The program will become the Greater Tri-Cities’ first four-year, calculus-based engineering program, admitting its first class next fall, pending approval from the Southern Association of Colleges and Schools Commission on Colleges. By 2020, the year Milligan hopes to achieve ABET (Accrediting Board for Engineering and Technology) accreditation, the school should have between 160 and 240 engineering majors on campus.

“What we’re building – not only the curriculum, but the experiences the students go through – is work-ready participants,” Harrell says. From a career standpoint, combining strong curriculum and hands-on work in the lab including a “capstone laboratory experience” he says will differentiate Milligan from some regional counterparts, leaves Harrell confident that graduates will have both theoretical and practical experience that readies them to make an immediate impact occupationally. “We’ll be leveraging real-world experience to help students get an education that will build their knowledge base and skill set such that they can move into industry and their careers,” he says.

But it’s what he envisions Milligan-trained engineers doing with the rest of their lives – and probably sometimes in careers with non-governmental organizations or on the mission field – that helped draw Harrell to his new job. His wife, fellow engineer Hongyou Lu, is part of a package deal for Milligan. One of her roles will be identifying “design experience” projects for students that do more than just check a box for ABET, which requires projects for students at ABET-accredited schools to graduate.

“We’re going to choose projects that will change the world,” Harrell says. “That will supply clean water, that will desalinate water, projects that use solar panels to provide cooking energy, or light energy.”

Harrell isn’t the only one who’s excited, or at least enthusiastic, about the Tri-Cities finally getting an engineering school. (East Tennessee State University is also working toward a joint engineering offering with Tennessee Tech).

“I think it’s certainly going to be beneficial for us having somebody local that provides this type of curriculum,” says Aaron Cox, vice president of marketing and part owner of TPI Corp. in Gray. “The markets that we sell – electrical and mechanical – mesh with the type of students that Milligan’s going to train in this program. I think that the establishment of the engineering program at the school is going to benefit people here in ways we can’t really fathom yet.”

TPI and other regional industries have backed up their verbal support with in-kind and monetary support for the fledgling program first announced by the college last November, says Milligan’s Vice President for Institutional Advancement, Jack Simpson. “We’ve never seen a program developed that’s generated the level of support this program is getting.”

The primary benefactor of Milligan’s year-old School of Business and Technology also sounds bullish on the likely impact the engineering school will have on the region’s economy.

“It’s wonderful that a high-quality, nationally-ranked college in our area can now plug in to the engineering that is so desperately needed here by so many industries,” says BancTenn CEO and Milligan Trustee Bill Greene. Greene’s multimillion dollar gift, announced in early 2014, was the catalyst for Milligan’s School of Business and Technology, which bears his name.

“All you’ve got to do is go to Unicoi County, go to Kingsport, Johnson City, Bristol and then spread out from there, and you have an enormous demand for the engineering product. That’s what Milligan’s offering now, and I’m so delighted to be a part of that. I’m going to continue to be a part of it and it’s going to end up being one of the big lifesavers for the expansion and continued growth of our area.”

Part of that growth will be coming at Johnson City-headquartered NN Inc. The company, which moved into an expanded headquarters building last July, has announced two major acquisitions in the past year, including a recent $600 million purchase of Massachusetts-based Precision Engineered Products that will close later this fall. NN has legacy plants in Erwin and Mountain City, and CEO Rich Holder says he was pleased to learn about Milligan’s plans.

“We’re pretty excited about it, because as we grow into different market segments, we have a need for more and more engineering,” Holder says.

“We are looking for a place to create a technical incubator, a place to expand our R and D resources, and we’re going to go to a place that has engineering talent that we can take advantage of. If that talent is in concert with an academic institution, that’s even better.”

Milligan’s program will be among barely more than a handful at traditional small liberal arts colleges. Harrell, Lu and the team built around them will be responsible for meshing the rigor of an engineering curriculum with the additional coursework and experiences particular to liberal arts schools, all while integrating those into Milligan’s ethos of Christian servant leadership.

“We worked very diligently to make sure that we built the skills that are the core for all engineering degrees and also left room for the liberal arts piece,” Harrell says. “That was actually the big challenge in setting up the program.”

A Morristown native who first heard Milligan was considering adding engineering about two years ago, Harrell cut his teeth after graduating from UT-Knoxville working as a utilities process engineer for BASF’s Lowland plant in the late ‘80s and early ‘90s. Harrell then taught at Virginia Tech, earning his doctorate in thermodynamics while an assistant professor. He was also Virginia Tech’s main consultant to industry, and transitioned to full-time consulting work more than a decade ago. Of late, he’s had much work serving as lead technical advisor for Alcoa Corp.’s global energy team.

“Students at other engineering schools have interaction in the classroom and lab. They don’t have mentoring. That is the Milligan community. Professors have a life with the students. That is why it’s so important to choose the right professors. They have to have the right heart to say not only, we want to invest knowledge and skills, we want to invest life in life.”

Ron Dailey, engineering director at Nuclear Fuel Services in Erwin, confirms that. NFS works in realms that require Department of Energy security clearances, and Milligan students generally fit the mold, as several have been hired in other areas of NFS.

“Milligan provides well-rounded graduates with strong Christian values that would be a good fit for our organization,” Dailey said.

Looking further ahead, he said NFS – like many employers – has concerns about recruitment and retention. Around the time the college starts sending out its first grads, say 2020, NFS will be in the market.

“We have a good-sized population that will be retiring in the next five years or so,” Dailey says. “To have a feed of students who are ready to work, well-trained, and want to be in this area is a positive for us.

“Students who are from this area like this area and want to be here. So if you have an engineering student who is from this area, they’ll tend to be strong, stable employees for the region.”

Of course, all of those supportive companies are counting on a program that can produce graduates on a par with more established programs from larger schools. Harrell isn’t phased. For starters, he says Milligan’s lab will take students from theory to practice. They’ll operate air compressors, heat exchangers, pumps, fans – “all these pieces that we very commonly come in contact with in industry.”

Students will also have what Harrell calls a “capstone laboratory experience” their senior years (Milligan’s program will also offer a fifth year for those who want to do a year-long co-op in industry) that he says will differentiate Milligan from some of the Southeastern schools with which Harrell is familiar.

“Through junior year, they’re learning theory and application,” Harrell says. “As seniors, they’re going to spend a significant amount of their time in these laboratories with real-world equipment, where they will actually apply the knowledge and skills they’ve developed in their classroom experience.

“All of these things that are the core part of an energy engineer, or a process engineer’s livelihood, and we will have our students with explicit, direct, hands on experience with these pieces of equipment. Other engineering schools have some of that. We are making this a central focus of our curriculum.”

Harrell says that approach jibes with industry needs. Engineers less often spend an entire career with one company, and companies seldom have the resources and time to mentor newly minted engineers.

“They are looking for engineers that have skills ready to apply in the field,” Harrell says.

As much as anything, though, he hopes to see former students making a difference in the world thanks to the breadth of their education and the ingrained “Milligan ethos.”

“Couple a very skilled technical engineer with a grounding in liberal arts, with a grounding in people skills, with an attention to other peoples’ needs, with the Milligan community molding them, and they come up with a power wheelchair. They come up with something that is not only a conveyance vehicle but also changes someone’s life. That’s a product of engineering design with a liberal arts basis. That’s our passion.”