ESTAR: ‘You Are All Role Models’: Father of 9/11 hero Todd Beamer speaks at Milligan ceremony 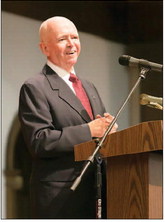 Read the original story, appearing in the April 8, 2015 edition of the Elizabethton Star,  here.

Servant leaders and community volunteers were praised for their work in the community and tasked to keep working by keynote speaker David Beamer during Milligan College’s annual Leaders in Christian Service ceremony Tuesday afternoon.

Beamer is the father of Todd Beamer, a passenger on United Flight 93 who rallied other passengers to attempt to take back the plane on 9/11 with the now-famous “Let’s Roll.” The Beamer family used to visit Milligan College’s School of Ministry when Todd was a child.

“Todd Beamer epitomized servant leadership in his daily life and on that fateful day,” Milligan President Dr. Bill Greer said. “It is with great honor that Milligan welcomes his father to assist in recognizing the tremendous servant leaders in our region who are doing an outstanding job of integrating their faith with their profession.”

Beamer thanked the Milligan College community for praying for the “Beamer clan,” noting the prayers had been felt, were working and that all were doing well.

“It is an honor to be here,” Beamer said. “It is a great opportunity to make another great memory here at Milligan College.”

Beamer congratulated the 13 servant leaders who were being recognized during the ceremony, noting they had made an impact in the community because of their leadership and service to others.

“You are all role models, doing things in the right way,” he said. “Our Lord Jesus Christ is the oldest example of what it is to be a servant leader. When He came, He came as an example. What he did, the world has not seen leadership like His since. His service has not been matched. Just two days ago, we celebrated Easter, Resurrection Sunday. For Him to take our sins, and suffer and bleed and die, that is service with three capital S’s.”

The recipients, along with Milligan students, were challenged to keep living as volunteers and servant leaders to do things for others.

“Our culture, our society and our nation really needs some positive Christian examples of doing the right thing,” Beamer said. “We need to be out there to show there is such a thing as the truth. Many people in positions of leadership and influence do not share the same value system and a belief in an absolute truth as we do. The world needs more of you and what you do.”

The recipients also received a challenge in their recognition.

“That day hurt, and it still does,” Beamer said. “After what Todd did, people wanted to know about him. It was our opportunity to share. We believe it is in God’s will to use those opportunities and to share the truth as we believe it is.”

Todd knew Jesus as his personal savior, Beamer said. He then challenged those in the audience to share Jesus with their family members, classmates or others they come in contact with.

“Everyone knows of Jesus, but do they have a personal relationship with Him,” Beamer said. “If you have friends, family, associates that know of Him but don’t know Him, be bold of service and leadership and introduce them to Him. That is the most important thing. You never know when a day will be the day before.”

Beamer grew up just outside of Homeworth, Ohio, and has led a career in engineering, education and management. Beamer started as an engineer at the Guided Missiles Range Division in Cape Canaveral, Florida, in the 1960s. He later worked in sales and executive education at IBM before rising to administrative capacities, including corporate officer and vice president of Amdahl Corp., president of Filatek, chief operating officer of Legato Systems and executive vice president of Legato Operations for EMC Corp. Beamer currently serves on the Board of Directors of the National September 11 Memorial and Museum.