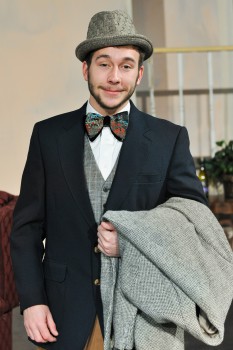 Directed by Professor of Theatre Richard Major and designed by Pamela Adolphi, “Harvey” is a comedic romp for the entire family with hilarious twists and turns as Elwood P. Dowd tries to convince everyone he meets that his best friend is a six-foot-tall rabbit whose name titles the play.

American playwright Mary Chase received a Pulitzer Prize for writing “Harvey” in 1945. The play has been adapted for film and TV, most notably the 1950 film starring James Stewart as Elwood.

“This production showcases some excellent talent,” said Major. “It is headlined by a wonderful group of six graduating seniors who have delighted audiences in Milligan theatre productions for the past four years.”

This play is produced by special arrangement with Dramatists Play Service, Inc.