‘The Major Players’ present first production this weekend at Milligan 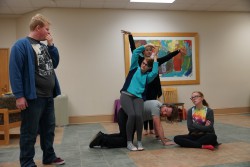 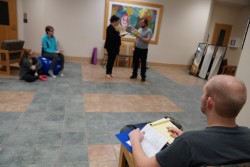 Directed by 2012 Milligan graduate and Elizabethton native Daniel Banks, “Circle Mirror Transformation,” by Annie Baker, is a play about a small group of people who take an acting class at a local community center. It was voted one of the top ten plays of 2009 by the New York Times, Time Out and the New Yorker.

“Circle Mirror Transformation is a character study told through vignettes,” said Banks, who recently ended a tour with the National Theatre for Children. “Through the silly improvisational games played during the class, the characters ultimately reveal their serious real-life issues. I think people will find the play at times humorous, but also thought-provoking.”

Named for former Milligan professor Dennis Elkins, Banks’ production company “Theatre Elkins” teamed up with the “The Major Players,” a group that similarly takes their name from Richard Major, professor of theatre at Milligan. This is Banks’ sixth production under the “Theatre Elkins” moniker.

“It’s amazing what these students have done on their own,” said Major. “They have demonstrated a strong desire not only to succeed in the classroom, but also to create art for Milligan and the surrounding community to enjoy. It’s an honor to be their namesake.”

Tickets are $5 for general admission and $3 for students. All major credit cards accepted.