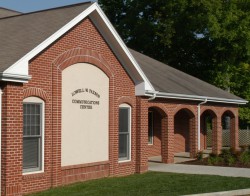 MILLIGAN COLLEGE, Tenn. (Jan 16, 2015) – Lowell “Bud” Paxson, co-creator of the Home Shopping Network and the family-friendly network PaxTV, died Jan. 9 at his home in Montana. He was 79.

Paxson served on the Milligan College Board of Trustees for a number of years and in 1987 donated $1.6 million to expand and house the college’s communications program.

“We are deeply saddened by the passing of Mr. Paxson,” said Milligan President Dr. Bill Greer. “He believed strongly in Milligan’s mission to prepare Christians to work in the communications industry. The strength of our communications program today is a testament to his foresight and generosity.”

In 1992, Paxson also helped fund the construction of Quillen Hall and Kegley Hall, used as men’s residence halls at Milligan.

“We discussed how a Christian liberal arts college needed a strong communications major so students could understand the influence of mass communication and how to use it effectively,” said Leggett.

Services will be at 4 p.m. on Jan. 22 at Christ Fellowship Church, 5342 Northlake Blvd., Palm Beach Gardens, Florida. A reception will follow at 6 p.m. at The Breakers.