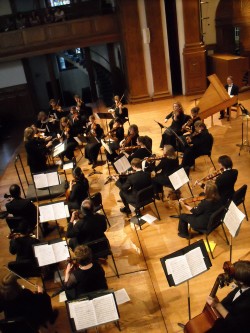 MILLIGAN COLLEGE, TN (March 25, 2014) — The Milligan College Orchestra will conclude its season with a spring concert titled “Concertos, Arias, and Cellos, Oh My!” on Friday, April 4, at 7:30 p.m. in the Mary B. Martin Auditorium of Seeger Memorial Chapel. The concert is free and open to the public.

The concert, directed by Dr. Kellie Brown, will feature Milligan students and faculty, as well as professional performers from the area in various concertos and arias.

“This is a very exciting opportunity for the Milligan Orchestra to feature the wonderful soloists at Milligan and in the community,” Brown said. “We also want to celebrate the cello teachers in the area who are creating the next generation of orchestra players and soloists.”

Brown serves as the conductor of the orchestra, as well as director of the strings program and chair of the music department at Milligan. She has been a member of the Milligan faculty since 1998.

During the concert, sophomore Laura Mixon, of Kingsport, Tenn., will sing “Ain’t It a Pretty Night?” from the opera “Susannah” by Carlisle Floyd and “Goodnight Moon” by Eric Whitacre. Mixon is a music performance major at Milligan.

Oboist Larry Mueller will perform the beautiful “Concerto in G minor for Oboe” by Johann Fasch. Mueller holds degrees from Ohio University and the University of Iowa. He has served as the principal oboist for several symphonies and operas, including the Johnson City Symphony Orchestra.

After intermission, the Milligan Orchestra will celebrate the cello students and teachers in our region by featuring cellists from ages 5 to 18 from the teaching studios of Fitzgerald, Sinko and Cynthia Mueller. These students will delight the audience with works by Paganini, Weber and Vivaldi, including some clever and surprising pieces such as the “One Bow Concerto” and “End Pin Rag.”

Fitzgerald is the principal cellist of the Johnson City Symphony and performs with other regional symphonies. She is also a founding member of The Paramount Chamber Players, a group of musicians dedicated to sharing chamber music with local audiences.

Mueller teaches privately in her home, as well as at East Tennessee State University and University of Virginia Wise. In addition her teaching work, she has been performing double-bass and viola, for more than 40 years in various symphonies.