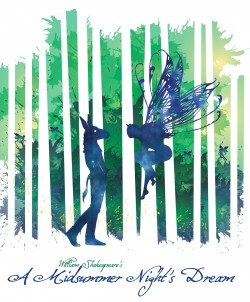 MILLIGAN COLLEGE, TN (March 7, 2014) — The Milligan College theater department will present William Shakespeare’s “A Midsummer Night’s Dream” from March 27 to 30 in Milligan’s McGlothlin-Street Theatre of the Gregory Center for the Liberal Arts.

“‘Midsummer’ is by far one of the most popular of Shakespeare’s comedies, and Milligan’s staged version lives up to the hilarity one expects of this play,” said Richard Major, director and professor of theatre at Milligan.

“A Midsummer Night’s Dream” takes audiences on magical romp through a fairy-infested forest, complete with star-crossed young people in love, a motley crew of rustic actors and a grumpy curmudgeon who tries to put a damper on the marital merriment.

Milligan’s family-friendly production will appeal to audiences of all ages, and Major encourages theater-goers not to be intimidated by the playwright.

“I have tried my very best to make this production accessible to all ages, which is in sharp contrast to what many people envision when they  hear that a theater group is doing a Shakespearian production,” Major said. “Many people wonder how a play written half a millennium ago can have anything relevant to say to a person living in the 21st century. Well, Shakespeare wrote for the masses, and the themes in his comedies are ageless as he wrote about love, sacrifice, whimsical encounters and playful moments between human beings.”

Pamela Adolphi, director of lighting, scenery and costume design, helps create those playful and memorable moments on the Milligan stage.

“Pamela never ceases to amaze me, as she always seems to design shows in a way that not only serves the needs of the play, but in a way that transports us to the magical place where the action takes place,” Major said.

Headlining the cast is Laura Mixon, of Kingsport, Tenn., as the mischievous Puck, a fairy who sets the play into motion.

Joining the spritely elf is Darcie DeLong of Indianapolis, Ind., as Hermia; Danielle Moore of Unicoi, Tenn., as Helena; Christopher Heldman of Indianapolis as Lysander; and Adam Derrick of Boone, N.C., as Demetrius.

Christopher Boswell of Johnson City, Tenn., plays the ever self-effacing role of Bottom, leading the way for a motley assortment of characters who desire to perform “a tedious brief play” for the Duke of Athens, portrayed by Ben Carpenter of Mexico City, Mexico, and his Palace Court.

Joining the cast of students is Dr. Lee Blackburn, assistant professor of history and humanities and director of the humanities program at Milligan, playing the role of Egeus. Blackburn performed in several plays when he was a student at Milligan, but ‘Midsummer’ marks his first role as a faculty member.

“It has been a real thrill to be back on the Milligan stage,” Blackburn said. “I especially enjoy getting to see a side of my students I don’t often see in the classroom. The experience has been a reminder of just what gifted students we have here at Milligan.”

Advance tickets are on sale in the Milligan Bookstore, open Monday-Friday, 8 a.m.-5 p.m. or by calling 423.461.8733. A limited number of tickets will be on sale (until sold out) at the box office 30 minutes prior to each performance.