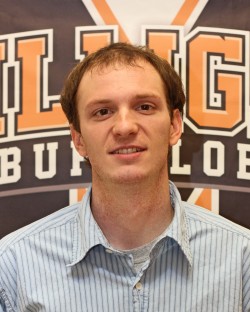 Manget, a native of Marietta, Ga., previously served as SID for former Appalachian Athletic Conference foe Covenant College, where he guided the sports information operations for 13 varsity sports during the school’s transition from NAIA to NCAA Division III.  He recently completed a master’s degree in sports administration from Marshall University, where he served as a graduate assistant in the “Thundering Herd’s” SID office and was the primary media representative for baseball, women’s soccer, tennis, and track and field.

“Daniel is an impressive professional who is highly regarded by his former colleagues and fellow sports information professionals,” said Shell. “His graduate school experience at a Division I program, along with his experience at an NAIA school, will prove invaluable as he transitions to his new role at Milligan.”

Manget holds a bachelor’s degree in mathematics and a minor in physical education from Covenant, where he competed for the “Scots” in tennis.

“We are extremely excited about Daniel joining our athletics program as SID,” said Mark Fox, vice president for student development. “His skills and experience will be beneficial as we continue to promote Milligan athletics  ̶  our coaches, student athletes and their many successes.”