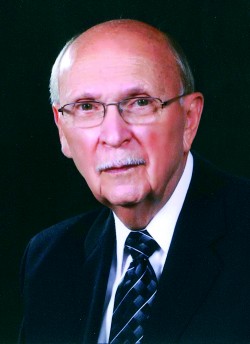 MILLIGAN COLLEGE, TN (Dec. 5, 2013) — Dr. Gene Wigginton, retired president of Standard Publishing in Cincinnati, Ohio, will be the keynote speaker at the Milligan College commencement ceremony on Friday, Dec. 13, at 7 p.m. in the Mary B. Martin Auditorium of Seeger Memorial Chapel.

For those who are unable to attend, the ceremony also will be broadcast live at www.milligan.edu/streaming.

Milligan will award 101 degrees at the ceremony. The December graduates include five Bachelor of Arts (B.A.), 39 Bachelor of Science (B.S.), 19 Master of Business Administration (M.B.A.), nine Master of Education (M.Ed.) and 29 Master of Science in Occupational Therapy (M.S.O.T.) students.

In addition to his service with Standard Publishing, Wigginton also has served Milligan in a variety of ways over the years, including roles on the college’s staff and Board of Trustees.

Wigginton came to Milligan in 1971 when he accepted a position as director of development. He later served as executive vice president preceding the arrival of Milligan’s 13th president, Dr. Marshall Leggett.

In the spring of 1983, Wigginton and his wife, Shirley, moved from Milligan to Cincinnati, where he began a career as a publisher for Standard Publishing and later served as president. Upon his retirement from Standard, The Eugene H. and Shirley W. Wigginton Scholarship Fund was established at Milligan.

In 1984, Wigginton received Milligan’s Fide et Amore in recognition of his loving and faithful service to the college. He was awarded the college’s honorary Doctor of Laws in 1986.

This fall, one of the five new residence halls in the Milligan Village was named in honor of the Wiggintons. Their daughters, along with gifts from other family and friends, made possible the naming of Wigginton Hall, which was dedicated Oct. 25 during Milligan’s annual Homecoming.