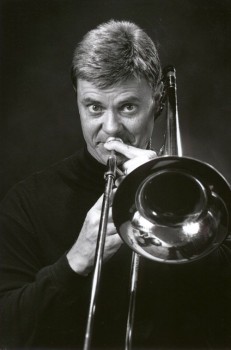 MILLIGAN COLLEGE, TN (Nov. 4, 2013) — The Milligan College Jazz Ensemble will present “A Salute to the Big Bands” on Monday, Nov. 25, at 7:30 p.m. in the Mary B. Martin Auditorium of Seeger Memorial Chapel. The concert is free and open to the public.

Under the direction of Rick Simerly, the 22-piece ensemble will pay homage to a legendary jazz era.

“This concert is a tribute to the most popular period of jazz―the swing era,” said Simerly, associate professor of music at Milligan. “We will be performing songs made famous by some of the greatest big bands of the 30s and 40s.”

The concert also features guest piano soloist Charles Goodwin, veteran sideman of some of the swing era’s most popular bands. Goodwin organized his first band in 1948 and has performed more than 1,000 concerts and special events throughout the southeastern United States.

As a performer, he has played with big band royalty including Bob Crosby, Tommy Dorsey, Jimmy Dorsey, Glenn Miller, Sammy Kaye, Nelson Riddle, Charlie Spivak and Guy Lombardo’s Royal Canadians. As an arranger he has written for the bands of Buddy Morrow, Charlie Spivak, Ray McKinley and singer Ray Eberle. In 1981 several of his arrangements were featured on the Grammy-nominated album, “Charlie Spivak Now.”

Music will be featured from the libraries of Glenn Miller, Benny Goodman, Tommy Dorsey, Harry James, Count Basie and Duke Ellington. In addition, the Charles Goodwin Trio, consisting of Charles Goodwin on piano, Fred Goodwin on bass and Eddie Dalton on drums, will perform on several selected numbers.

“This evening will feature music from ‘The Greatest Generation,’” said Simerly. “Hopefully it will bring back memories of that historic era and have people tapping their feet and dancing in the aisles.”