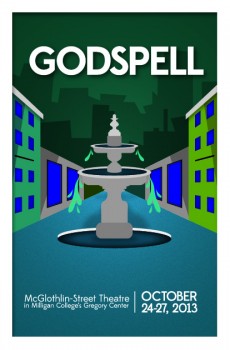 MILLIGAN COLLEGE, TN (Sept. 30, 2013) — The Milligan College theater and music areas will present the musical “Godspell,” Oct. 24-27 in the McGlothlin-Street Theatre in Milligan’s Gregory Center for the Liberal Arts.

General admission is $8; tickets for children, students and senior citizens over 60 are $5. Tickets go on sale Oct. 1, in the Milligan Bookstore.

Based on the Gospel of Matthew and featuring a sparkling score by Stephen Schwartz, “Godspell” boasts a string of well-loved songs, led by the international hit, “Day By Day.”

Drawing from various theatrical traditions, such as clowning, pantomime, charades, acrobatics and vaudeville, “Godspell” is a groundbreaking and unique reflection on the life of Jesus and brings his parables humanly and hearteningly to life.

“For over four decades, ‘Godspell’ has delighted audiences virtually all over the world with its unique retelling of the Gospel of Matthew,” said Director Richard Major, professor of theater at Milligan. “Fresh off a Broadway revival in 2012, the score has been revamped and the new arrangements have delightfully captured the zip and energy of the 21st century.”

Kathryn Handzlik, a senior from Chalfont, Penn., is the stage manager. She is assisted by Tess Evans-Shell, a junior from Roanoke, Va. Rachel Owens, a recent Milligan graduate from Jonesborough, Tenn., will serve as the choreographer for the show.

The cast features Matthew Rees in the role of Jesus. He is a senior fine arts major from Redford, Mich. The roles of John the Baptist/Judas will be performed by Caleb Shaw, a music educator in Washington County, Tenn. They are joined by an ensemble cast of talented student actors and crew members.

The production is one of several special events to be held on campus during Milligan’s annual Homecoming festivities. To purchase advance tickets, visit the Milligan College Bookstore, open Monday through Friday, 8 a.m. to 5 p.m. (and until 6:30 p.m. on Tuesdays and Thursdays) or call 423.461.8733.

For more information about arts events at Milligan, visit www.milligan.edu/arts.