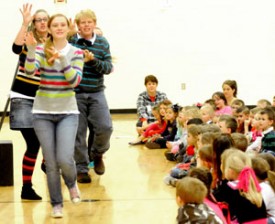 Milligan College’s Theatre for Young Audiences has made around 300 different appearances, performed a 1,000 different performances and has entertained approximately 190,000 school children in the region for the last 25 years.

The theater company, which was created in 1987 by Milligan theater professor Richard Major, began as a labor of love from his own experiences as an actor and his appreciation for the young audience genre.

“The idea was to complete the educational loop to provide an opportunity where my students actually did some research and then had … to work as an ensemble to write a script based on that research,” he said. “Very early in the semester every year we try to determine what the topic is that we want to take on.”

In the past, the troupe has portrayed a variety of socially driven issues on stage, including issues surrounding recycling, smoking and health.

This year, the theater troupe decided to put together a play on technology.

“They decided they were going to look at the development of technology over the last 100 years and the way to do that they felt was to have a little after-school group, called ‘The Tech-tastic Time Travelers,’” Major said. “They then have a session with … their teacher and they try to answer all of the questions that come up about technology. The big question that we try to answer in the play is ‘What’s the next big thing?’”

This year’s theater troupe is made up of Milligan sophomores Courtney Blair, Adam Derrick and Darcie DeLong, as well as juniors Danielle Moore and Tess Evans.

Evans said the troupe is a pretty close-knit group and that being in the company has been fun.

“The chance to be a part of TYA and be a part of Milligan’s theater company is just the opportunity to be able to create,” she said. “It’s really fun to be able to produce an art form for somebody else and be able to do that in such a way where it’s kind of a think tank where we can feed off each other.”

Moore said that while the play is teaching elementary school children about the history of technology, the members of the troupe have learned a lot as well.

“We’re talking a lot about technology through time and one of the best things that I think about this program is that a lot of these kids have never been introduced to live theater before,” she said.

The play, while not prop driven, did include quick snippets of popular songs sung by the actors, modern day references that were age appropriate and even a short race between two actors around the gym.

As the five students performed their play at West Side Elementary School in Elizabethton on Tuesday, both students and teachers listened and laughed as explanations of technological advancements were told during the different segments, or time periods.

“There is nothing in the world like going to schools two times a week and hearing students laugh or respond to the material. That’s the kind of music I will never tire of,” Major said.

With 25 years of foundation already set for the program, he said he hopes the theater troupe will be something that will continue on at the school long after he’s gone.

“I hope it is something that … will be part of the legacy that I will leave at Milligan College,” Major said. “I think (TYA) has made a significant impact on our region.”

Read the original article on JohnsonCityPress.com.