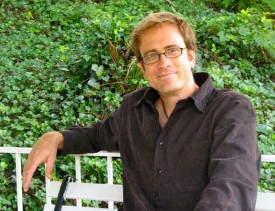 MILLIGAN COLLEGE, TN (Nov. 7, 2012) — Best-selling author and storyteller Steven James will speak at Milligan College on Tuesday, Nov. 13, at 11 a.m. in Milligan’s Mary B. Martin Auditorium of Seeger Memorial Chapel. The event is free and open to the public.

James has written more than 30 books spanning the genres of psychological thrillers, prayer collections, dramas, monologues, a nine-book series on creative storytelling, young adult fantasy and inspirational nonfiction. He is most well-known for his Patrick Bowers series, in which his FBI Special Agent protagonist tracks down terrorists, serial killers and arsonists.

On Nov. 1, he released “Placebo,” the first book of his new series, which follows Jevin Banks, an illusionist turned exposé filmmaker as he’s drawn into a far-reaching conspiracy involving one of the world’s largest pharmaceutical firms. Rooted in groundbreaking science, “Placebo” explores the far reaches of science, consciousness and faith.

James earned a master’s degree in Storytelling from ETSU in 1997 and is an active member of International Thriller Writers, the Authors Guild, Mystery Writers of America and International Association of Crime Writers. He is a contributing editor to Writer’s Digest, and has taught writing and storytelling principles on three continents.

For more information about faith, arts and culture events at Milligan, visit www.milligan.edu/arts.