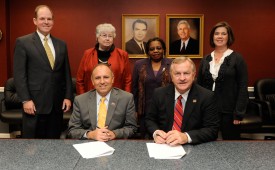 MILLIGAN COLLEGE, TN (Nov. 1, 2012) — Residents of Morristown and surrounding communities will soon have a closer option for completing a bachelor’s degree in early childhood education.

“Throughout the years, many well-prepared Walters State graduates have enrolled at Milligan to complete a bachelor’s degree, so we are pleased to be able to partner with them to provide this new, convenient opportunity for those wanting to teach pre-K through third grade,” said Milligan President Dr. Bill Greer.

“This articulation agreement enables Walters State students planning to transfer to Milligan to complete the bachelor’s degree in child and youth development without leaving Morristown,” said Walters State President Dr. Wade B. McCamey. “Walters State and Milligan have several existing articulation agreements and the two colleges have worked together in previous partnerships to expand the opportunities for higher education in East Tennessee. I look forward to watching this program grow.”

Milligan’s early childhood program allows adults who have already completed at least two years of work experience and about two years of college—either at Walters State or elsewhere—to complete the child and youth development major in 18 months. Students can certify to teach at the early childhood (PreK-3) level with additional courses and a semester of full-time student teaching. To earn their bachelor’s degree, students must also complete the college’s general education requirements, but often these have been met in a student’s prior coursework.

“This program is ideal for people who want to teach at the PreK-3 level in public and private schools or to serve in leadership positions in preschools or child development centers,” said Dr. Lyn Howell, associate professor and chair of education at Milligan.

Howell explained that Head Start and preschool programs are encouraging more teachers to hold a bachelor’s degree and early childhood certification, and this program is in response to that need.

Classes will meet one night a week at the Walters State Morristown campus. The program is cohort-based and will be taught in conjunction with Milligan’s on-campus program. Courses will be delivered to Morristown using interactive televideo technology. The technology allows students to interact with other students and teachers on Milligan’s main campus. The cohort that begins in January will meet on Thursday evenings.

Early childhood education is one of over 100 programs offered by Walters State. The college has around 6,500 degree-seeking students and campuses in Morristown, Greeneville, Tazewell and Sevierville. Walters State is governed by the Tennessee Board of Education. National honors received this year include being named one of the nation’s safest colleges, a military-friendly college and being one of the country’s top tech-savvy community colleges.

Milligan is designated a military-friendly college and is consistently named among U.S. News & World Report’s “America’s Best Colleges” rankings. In addition, Washington Monthly names Milligan among the top 100 baccalaureate colleges in the nation in a ranking that examines what colleges and universities are doing for their students and the public good.

Milligan’s teacher education program is fully approved by the Tennessee Department of Education and is one of only nine private colleges in Tennessee accredited by the National Council for Accreditation of Teacher Education (NCATE) (2010 Massachusetts Ave. NW, Washington, DC 20036; 202-466-7496).

“NCATE accreditation means that a Milligan degree is instantly recognized in Tennessee and throughout the nation for its quality,” said Howell. “Milligan’s education program has a reputation for producing quality teachers with a strong sense of dedication to their students.”

Milligan also has received advance approval from the Commission on Colleges of the Southern Association of Colleges and Schools (SACS) (1866 Southern Lane, Decatur, Georgia 30033-4097; 404-679-4501) to offer the off-site program in Morristown.

To share more details about the program, Milligan will host an information session on Tuesday, Nov. 27, from 4:30-6:30 p.m. on Walters State’s Morristown campus. The information session will be held in the Foundations Room, located in the Dr. Jack E. Campbell College Center Building. No pre-registration is required to attend.