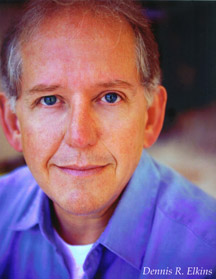 Dr. Dennis Elkins, the newly hired artistic director for Milligan College’s theatre program, hit the ground running when he arrived on campus for the fall 2009 semester.

Under Elkins’ direction, the Milligan theater department performed a production of “A Shakespeare Double Bill: Titus ‘n 2 Gents” in October at the new Gregory Center for the Liberal Arts. The production is comprised of abbreviated versions of two of William Shakespeare’s earliest works, “Titus Andronicus” and “The Two Gentlemen of Verona.”

“I was hired to direct three plays for the year,” said Elkins, who is also adjunct instructor of humanities both at Milligan and at Walters State Community College in Morristown.

“We are in the process of planning for the Summer Arts Academy program, and part of my responsibility has been in planning a segment for theatre for high school students,” he noted. “They can come here for two weeks and they take classes in the morning and workshops in the afternoon. They go to rehearsal in the evening and in two weeks they put on a show, and they get three hours of college credit for it. There are also programs in music and communication. We’re really excited about it.”

Born in Elkhart, Kan., Elkins obtained a bachelor of arts degree in humanities from Milligan.

“After that, I did a master’s in speech and theatre at the University of Tennessee in Knoxville,” said Elkins. “I taught for three years at a small Baptist college in South Carolina, that is now North Greenville University, and then did my doctorate at the University of Colorado at Boulder. I came back to East Tennessee again to take a job at Walters State for 10 years.”

Elkins also completed graduate studies at the University of Birmingham in England.

Elkins taught theatre at Savannah (Ga.) College of Art and Design (SCAD) from 2003 until he joined the Milligan faculty this year.

Having lost his only son to drugs last year, Elkins said he is very sensitive to the issues being faced by young people. Although life has been a struggle since the tragedy, he said he is attempting to focus his energy on working with theatre students at Milligan.

“I certainly enjoy being with this age group. They help make me not feel so old,” he said. “I had been in Savannah six years, and I liked living there and teaching there, but because of things that were happening in my personal life I didn’t want to stay there.”

Then came the timely opportunity from Milligan College. “I was planning on finding something else, and Milligan contacted me and asked if I was interested to come and do this for a year,” he said. “It was good timing for me. It sounded like a nice opportunity for some personal healing.”

Elkins said that having been a student at Milligan, he was familiar with many aspects of the campus, but working in the new theatre at the Gregory Center was symbolic of the fresh start he was making in his personal life.

“I can create new memories here,” he said. “At this time and place, I’m open to possibilities.”

A member of the Actors Equity Association, the Southeastern Theatre Conference and theVoice and Speech Trainers Association, Elkins has presented papers on theatre and vocal performance at academic conferences throughout the United States and has received several awards in his field, including the Presidential Fellowship from SCAD in 2004.

Elkins said he has seen a resurgence of interest in the arts, with more young people taking ballroom dance classes, and although the larger theatre companies are struggling through the current economic crisis, smaller community-based theatre groups are faring better.

In the past 18 years, the Milligan College Theatre for Young Audiences has toured area schools, performing original productions for more than 175,000 children in the region.

In April 2005, Milligan College’s Board of Trustees approved plans to build the 30,000 square foot liberal arts center with a 290-seat theatre for the college’s theatre arts program. The facility, which was dedicated in February 2008, includes backstage support, staging, workshop for theatre classes and darkrooms for photography students. As a convocation center, the auditorium also will be used for the college’s humanities program, academic lecture series and various campus community events.

Elkins said he sees a lot of potential for the theatre department in the new Gregory Center.

“We’re doing a musical (“Little Women” in February 2010) – which is always big fun – and for the final show of the season we’re doing a new play by a contemporary American playwright, Sarah Ruhl,” he said. “This will be happening in April, and the name of it is “Eurydice.” It’s based on Greek mythology. So we get to do a classic play, a musical and a new play, and I think that’s an ideal formula for a college setting and for the community which it serves.”