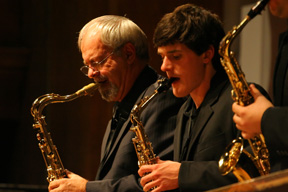 MILLIGAN COLLEGE, Tenn. (November 9, 2009) – The widely acclaimed Milligan College Jazz Ensemble will perform its fall concert on Monday, Nov. 23, at 7:30 p.m. in Milligan’s Seeger Memorial Chapel. The performance is free and open to the public.

The 21-piece ensemble will take the stage under the direction of Rick Simerly, associate professor of music at Milligan.

“This is one of our more difficult programs,” Simerly said. “Although the arrangements are demanding, we’re excited about the music and look forward to a successful concert.”

The concert will feature a variety of songs from the libraries of the Lincoln Center Jazz Orchestra, Count Basie, Bill Watrous, Chick Corea, Freddie Hubbard, Duke Ellington and the Tonight Show Band.

The band will perform an original composition, “Learning to Love,” written especially for the ensemble by trumpet player, Sloan Hill. In addition, the concert will feature “Spain” by Chick Corea; “Just Friends” by Tommy Newsom; “Shiny Stockings,” made famous by the Count Basie Band; and a driving Latin jazz feature, “Bistro Latino.”

A highlight of the evening will be a Duke Ellington ballad selection, “In A Sentimental Mood,” featuring tenor saxophonist Dick Davis. “Bernie’s Tune,” arranged by Lincoln Center saxophonist Victor Goines, and a rock rendition of Freddie Hubbard’s “Mr. Clean” will round out the program.

For more information contact the Milligan College Music Department at 423.461.8939, or visitwww.milligan.edu.