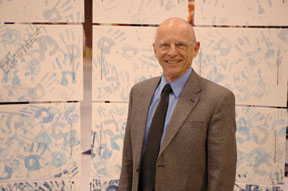 MILLIGAN COLLEGE, Tenn. (October 29, 2009) Milligan College will host the 2009 East Tennessee Christian Convention on Sunday, Nov. 8. Scheduled events throughout the day include a leadership workshop, women’s ministry workshop, main worship session and activities for youth and children. The convention is free and open to the public.

The East Tennessee Christian Convention is the longest-running state Christian convention in North America. This year’s event marks the 180th consecutive year for the convention, which was originally known as the Annual Meeting of the Christian churches/churches of Christ of Northeast Tennessee, Southwest Virginia and Western North Carolina.

A planning team consisting of area ministers and Christian leaders meets year-round to prepare for the convention. The planning team is led by John Marr, counseling and community care minister at First Christian Church of Johnson City, Tenn. Marr is also the co-founder and director of Higher Ministries, a ministry serving the needs of the local church minister, their families and the congregations they serve.

Dr. Leroy Lawson will speak at the leadership workshop from 3:30 to 5 p.m. in Milligan’s Hyder Auditorium and again for the main session from 6:30 to 8 p.m. in Seeger Memorial Chapel. Mike Imboden, minster of music and worship at First Christian Church of Johnson City, will lead the worship during the main session. A choir consisting of choir members of several local congregations, directed by Tempa Bader, music minister at Crossroads Christian Church in Gray, Tenn., will also be featured during the main session.

Lawson serves as an international consultant for Christian Missionary Fellowship International(CMFI), a leading missionary organization associated with the Christian churches/churches of Christ. He also served as president of Hope International University in Fullerton, Calif., from 1991 to 2004, and as the senior minister of Central Christian Church in Mesa, Ariz., for 20 years. Under Lawson’s leadership, the congregation grew from an average attendance of 490 to approximately 4,500.

Lawson was a member of Milligan College’s faculty from 1965 to 1973, serving as a professor of English, director of the humanities program and vice-president. He currently serves on Milligan’s Board of Trustees.

The women’s ministry workshop, titled “Becoming a Difference Maker,” will be held in Milligan’s Gregory Center for the Liberal Arts from 3:30 to 5 p.m. Lori Drain, director of women’s ministries and development for Higher Ministries, and LeAnne Blackmore, will speak. Jerry Leeper and Avoca Praise will lead worship.

Crossroads Christian Church, located at 1300 Suncrest Drive in Gray, will host the student convention from 4 to 8 p.m. The program includes worship, workshops and a pizza dinner. The theme for the program is “The Most Boring Weekend (Ever!),” and will feature speaker Laura Buffington, young adult discipleship leader from Southbrook Christian Church in Miamisburg, Ohio.

Childcare for children from birth to fifth grade will be provided from 3:30 to 5 p.m. atHopwood Christian Church on Milligan’s campus and will resume at 6 p.m. with the KIDSLAM children’s convention. Jim Goehner, children’s minister for Crossroads Christian Church, will lead the activities.

Lawson will also lead a church staff breakfast on Monday, Nov. 9, at 8:30 a.m. in Milligan’s McCormick Dining Center Annex. Area church staff members are welcome. The cost for the breakfast is $5.

For more information, contact Higher Ministries at 423.502.6962 or visitwww.higherministries.com/events.