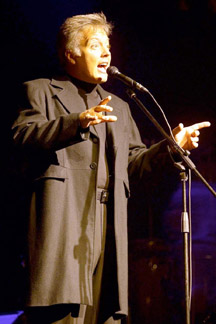 MILLIGAN COLLEGE, TN (October 5, 2009) —The popular musicals “The Rock & The Rabbi” and “The Witnesses” return to the stage at Milligan College for its annual Homecoming festivities, Oct. 23-25.

Both musicals were co-written and produced by Milligan alumnus Gary Richardson, along with Danny Hamilton. The creative duo and their supporting cast will present the musicals at Milligan’s Gregory Center for the Liberal Arts.

“The Rock & The Rabbi” will take the stage on Saturday, Oct. 24, at 7:30 p.m. It is the musical story of the friendship between Peter and Jesus. Consisting of a mix of original acoustic music and storytelling, this nationally acclaimed musical celebrated its 10th anniversary in 2008.

“The Witnesses” will be presented on Sunday, Oct. 25, at 2:30 p.m. This sequel to “The Rock & The Rabbi” tells the story of Peter, Paul and the birth of the church. The production rests on the shoulders of Richardson, the narrator, as he recounts Peter and Paul’s stories. He is supported by the voices and musical performances of the cast.

This marks the second performance of both “The Rock & The Rabbi” and “The Witnesses” at Milligan. “The Rock & The Rabbi” was presented in 2001 in Seeger Chapel, before the construction of the Gregory Center for the Liberal Arts. “The Witnesses” was the first production staged in the Gregory Center after it was constructed in 2008.

“We are very excited these productions are returning to Milligan” said Theresa Garbe, director of alumni relations at Milligan. “I have been getting calls from people from out of state, inquiring about purchasing tickets. These shows are drawing audiences from the entire community.”

Admission is $25 for each performance. Milligan’s student scholarships will receive $10 from each ticket purchase. Tickets for the performances are available in the Milligan College Bookstore, open Monday through Friday, 8 a.m. to 5 p.m., or by calling 423.461.8733.