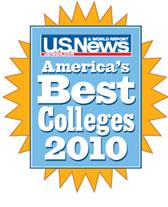 Each year U.S. News looks at 15 indicators of academic excellence for colleges and universities across the United States . These indicators include input measures that reflect a school’s student body, its faculty, and its financial resources, along with outcome measures that signal how well the institution does its job of educating students. Indicators include peer assessment, graduation and retention rates, faculty resources, student selectivity, financial resources and alumni giving.

Milligan President Don Jeanes said he is pleased by Milligan’s rankings, which reflect the college’s commitment to academic excellence and affordability.

“For nearly 150 years, Milligan’s focus has been to prepare Christian servant-leaders to impact our world,” said Jeanes. “It is good to see others recognize our level of excellence and the value of a Milligan education.”

The U.S. News Baccalaureate category is comprised of institutions which focus on undergraduate education and offer a range of degree programs in the liberal arts and in professional fields such as business, nursing and education.

The rankings will be published in the magazine’s September issue, on newsstands Monday, Aug. 24, and are available online at www.usnews.com beginning today, Aug. 20.