A 4,000-pound buffalo stands at Milligan 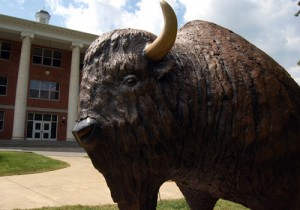 MILLIGAN COLLEGE — Buffaloes no longer roam the Great Plains in large numbers but one is standing on the campus of Milligan College.

The life-size buffalo is made from 4,000 pounds of concrete and rebar and firmly anchored in a concrete slab outside Derthick Hall on Milligan’s campus.

“A few alumni went together and bought that,” Milligan President Don Jeanes said. “We are the Milligan College Buffaloes.”

The structure was delivered and hoisted into place by crane several weeks before class started. The buffalo, named “Buffy” or “Brutus” depending on whom you ask, was built by Cemrock, a company based in Arizona that specializes in constructing unique landscapes and statues.

Jeanes said an Milligan graduate called the school’s attention to the existence of Cemrock, which had built a herd of similar buffaloes for Nashville. Apparently the city of Nashville ordered 10 or 12 buffaloes to be placed in the median of a road to give the appearance of a herd.

“So we had six alumni who went together and put the money up for this addition, and we had it custom made for us, so it’s the Milligan Buffalo,” Jeanes said. “And it is kind of an interesting addition to the campus.”

Milligan’s mascot is a charging buffalo. The school has always been associated with the word buffalo. The college began in 1866 as an academy called the Buffalo Male and Female Institute. Jeanes said about 15 years later the name was changed to Milligan College.

Buffalo Mountain in Johnson City is visible from Milligan’s campus and Buffalo Creek runs through the grounds.

“So I’m not sure whether we adopted the buffalo because of those two items or it’s the other way around,” Jeanes said.

Bill Greer, vice president for institutional advancement at Milligan, said the buffalo seems to be popular with students.
“Students walk by, they all smile when they see the buffalo,” Greer said. “Many of them have climbed on top of it, had photos made. I don’t know how many photos and videos have been shot of the buffalo already this year, but it has become a real campus focal point and I think students are really enjoying having it on campus.”