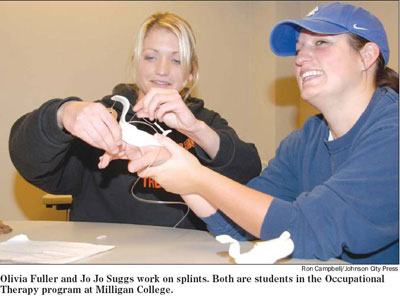 Everyone has goals. Some need a little more help to reach them.

Students in Milligan College’s master of occupational therapy program will be helping people to meet their goals once they graduate. On Friday night, 22 Milligan students will be recognized as OTs (occupational therapists). This profession helps stroke victims, those with traumatic injuries and small children with developmental problems learn how to perform everyday tasks.

Milligan has a lab for its OT students. It is equipped with a kitchen and bathroom. Equipment designed to perform seemingly simple tasks like bathing and cooking are demonstrated and attempted by students in the program in this lab.

The U.S. Department of Labor predicts that through 2016, the demand for OTs will increase by 23 percent. The median salary for OTs is $60,000 per year. Milligan’s students average about $50,000-$52,000 per year, said Jeff Snodgrass, Milligan’s OT program director.

“We have a 100 percent job placement, which is typical for most OT programs, because there is such a high demand,” Snodgrass said. “And frankly right now the demand far outpaces the supply.”

Milligan has 78 students enrolled in its OT program, which is a record for the school.

“When I started here six years ago we only had about a total enrollment probably of about 35 or 40 students total,” Snodgrass said. “And so in just about the past five and a half or six years we’ve grown from that to almost double. And so for the last four or five years straight we’ve hit record enrollment.”

The program at Milligan can accommodate 90 students. If demand continues to rise, Snodgrass said the program will have to expand. Currently, there is no national plan to meet the perceived demand for OTs.

“A lot of what’s fueling that, the increase in demand in the future, is the aging population,” Snodgrass said.

But it is not only older people who benefit from an OT. Children are a large group of patients seen by OTs.

“The three biggest settings where you’ll find occupational therapists, in terms of employment settings will be hospitals, what’s called ‘early intervention in school systems’ for the pediatric population as well as longterm car nursing facilities,” Snodgrass said.
Common degrees held by students prior to entering the program at Milligan are in psychology and exercise science.

“For this program they can come in with any undergraduate degree so long as they meet certain prerequisites,” Snodgrass said.

Courtney Whitaker just finished her first semester in the program. She has been
in occupational therapy since childhood.

“I wanted to be an occupational therapist after an OT came to my Girl Scout troop when I was in middle school,” Whitaker said. “And I was fascinated by her splint-making and adaptive equipment. And so I’ve been pursuing occupational therapy school ever since then.”

She is encouraged by her job always need help.

“I think that occupational therapists have good job security because we work with all ages and there are always people that have goals that they need help reaching,” she said.