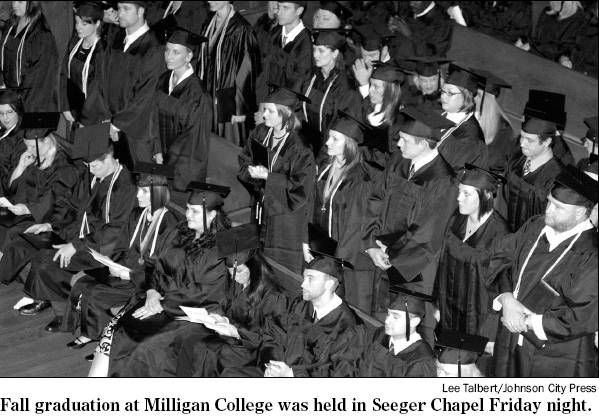 MILLIGAN COLLEGE — The December graduates at Milligan College didn’t get a laundry list of advice from their commencement speaker, although she did share a couple pieces of tips that was passed along to her that seemed to stick through the years.

Instead, Dr. Beverly Schmalzried issued more of a challenge to the 96 cap-and-gownclad graduates eagerly awaiting the degrees stacked on a table on the stage.

“I thought about what a person should try to do during a commencement speech. I considered giving you some advice. I tried to think of advice that I had been given in my long life that had really made a difference,” Schmalzried said.

Schmalzried, a nationally recognized childcare advocate and Milligan education professor, said she finally decided a benefit of being the graduation speaker is having the ability to try to persuade people to care about the things you do.

So it is Schmalzried’s love of children, and their well being, with which she challenged Milligan’s December graduates.

“Unless we support national, state and local initiatives designed to address the problems young people face, the problems will continue. Unless we work in our communities and churches on behalf of children, their lives will not improve. Regardless of whether you are in education or psychology or business or occupational therapy or graduating today from Milligan in some other field, you will have opportunities to be servant leaders by caring about children and their futures,” Schmalzried said.

“For me, it is a calling and an expression of my Christian faith. I hope it will be for you also.”

Graduate Lynne Attaway’s second master’s degree in occupational therapy may be a calling for her — she was drawn to it after her son-in-law of three weeks became paralyzed in a 2004 accident.

Attaway, a non-traditional student at age 62, had also had her own positive experience in the therapy scene, but after seeing the difference an occupational therapist made in her son-in-law’s life, she wanted to provide that kind of care too.

Attaway plans to work with brain injury and stroke patients.

“I have a strong interest in helping people,” Attaway said. “I love the fact that you can work with someone who has lost a function and help them regain a function, knowing that you can make a difference.”

Another Milligan graduate who will be helping people is Cody Whitlock, an Elizabethton native who graduated with a degree in exercise science.

Whitlock had planned to continue his education at East Tennessee State University in the physical therapy program, but he said he felt lucky to enter the working world right out of college. Whitlock recently joined Eastman Chemical Co. in Kingsport as an exercise specialist in the company’s health and wellness department.

“I’m really excited because I didn’t expect to get a job right out of school,” the 22-yearold Whitlock said. “This degree really calls for further education,” he said, adding that most of his classmates are going to graduate school.

“Academically I feel like I have a sense of accomplishment graduating from an esteemed college like Milligan,” Whitlock said.

Dave Taylor and Dr. Gary Wallace were honored with the Fide et Amore, the highest honor the college bestows on someone in recognition of their faith, love and service to the college.

Taylor has served as director of food service at Milligan for over 20 years and has been instrumental in making several enhancements to Milligan’s food service program, most recently overseeing the cafeteria renovation. Taylor resigned at the end of the fall semester to pursue other business ventures.

Wallace has served as professor of biology at Milligan for 38 years. He retired at the end of the fall semester. A 1962 graduate of Austin Peay State University (B.S.) and The University of Tennessee-Knoxville (M.S. and Ph.D.), Wallace taught and mentored countless students during his tenure at the college.