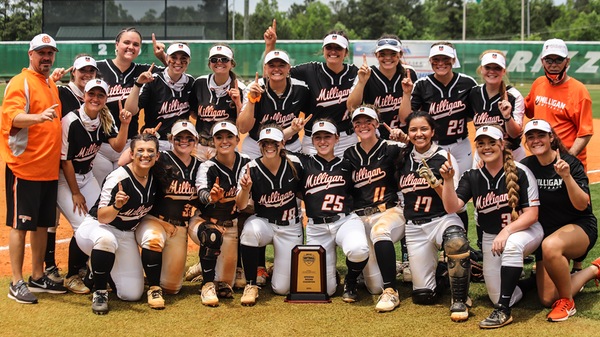 Milligan (32-7) will continue its season at the 40th annual 10-team, double-elimination tournament in Columbus, Georgia, May 27 – June 2.

Cantrell’s home run was the first of her career and came after Rio took an early lead of 1-0 midway through the first. The rally started with two out and one on when an April Alvarado walk and Kate Pendleton and Neelee Griffith singles made it 1-0 and loaded the bases. Cantrell then worked a full count before clearing the bases with a shot to left field that proved to be all the scoring the Buffs would need.

Milligan added to the lead with a run in the fourth on a Grace Jones RBI double.

With a 6-1 lead, Milligan looked to be well on its way to a big win until Rio scored two and loaded the bases in the seventh. The RedStorm had the tying run on first and the go-ahead run at the plate, but a ground ball ended the threat.

Erin Forgety pitched another remarkable game of six innings, five hits, three runs (two earned), one walk and eight strikeouts. She earned the winning decision and improved to 14-4. Cloee-Anna Merritt took care of the last three outs, striking out one.

For the tournament, Pendleton and Merritt ranked No. 3 and No. 4 in average, going 5-for-8 and 4-for-8, respectively. Forgety and Merritt combined for a 1.33 ERA across all three games, allowing only four earned runs (five total) while striking out 18 and walking only four. Forgety collected 12 of those strikeouts and two of the three wins.

Milligan scored 14 runs and batted .269 as a team while holding opponents to .211. Katie Cronin, the Appalachian Athletic Conference player of the year and NAIA batting champion, followed next behind Pendleton and Merritt with a .273 average (3-for-11).

Milligan has qualified for the NAIA Softball World Series and will compete in the 10-team, double-elimination field next week in Columbus, Georgia. Information on the final road to the national title is forthcoming.