‘The Curious Incident of the Dog in the Night-Time’ cancelled 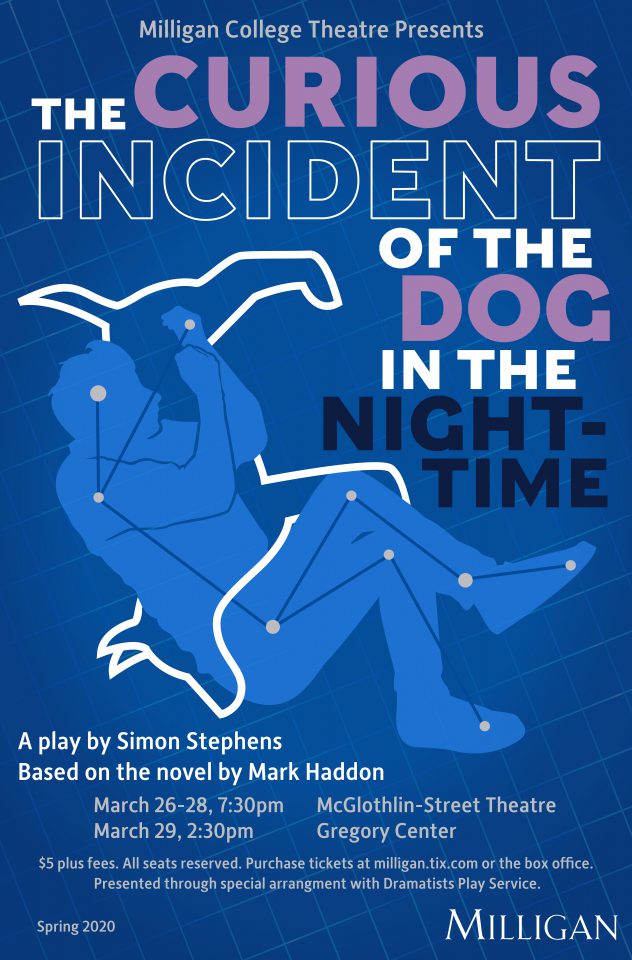 *Update – March 13* – Based on the changing dynamics and heightened levels of risk of the COVID-19 Coronavirus, all college-sponsored events requiring a physical meeting have been cancelled from Monday, March 16 until Friday, April 3. Milligan’s spring production of “The Curious Incident of the Dog in the Night-Time” will no longer be performed.

Performances will be Thursday-Saturday, March 26-28, at 7:30 p.m. and Sunday, March 29, at 2:30 p.m. in the college’s McGlothlin-Street Theatre located in the Gregory Center. All seats are $5 and reserved. Tickets can be purchased at milligan.tix.com.

“This is an exceptional play with a stellar company of actors and designers who have collaborated to share this charming and insightful drama with our community,” said director Richard Major, professor of theatre. “With moments of unintentional humor interlaced with high dramatic moments, audiences will be challenged with a story that is unlike anything else they have seen. The play and its content will leave you thinking long after the curtain closes.”

The play, based on the novel of the same name by Mark Haddon, begins with the mysterious death of a neighborhood dog, and 15-year-old Christopher Boone is a suspect. Christopher is an amateur detective, a mathematical genius and a person who registers on the autism spectrum. The plot follows Christopher as he works ceaselessly to satisfy his need for an answer as to who killed the neighbor’s dog. Along the way, Christopher’s complex relationship with his parents, Ed and Judy, unfolds and the compassion of his mentor, Siobhan, persists.

“I’ve performed in a few Milligan productions in the past, but this one is different,” shared McKeehan. “Sometimes dazzling and eccentric, and at other times raw and heart-wrenching, this play provides a glimpse into what life is like for those who live with and love a person with autism.”

Since its premiere, “The Curious Incident of the Dog in the Night-Time” has been received with acclaim. In 2013, it won seven Oliver Awards in the United Kingdom, tying for the record, and has only been surpassed by “Harry Potter and the Cursed Child” in 2017.

A richly theatrical exploration that is both touching and bleakly humorous, this play is intended for older teens and adults. On Thursday, March 26, Milligan will host a talkback with actors, director and designers after the show.