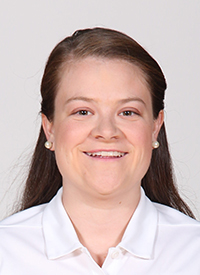 Kylie Russell joined the Milligan women’s basketball staff as assistant coach in 2017 and became the program’s head coach in April, 2020.

A 2015 Milligan alumna who played for four seasons under long-time coach Rich Aubrey, her predecessor, Russell made her presence felt in all phases of the program. In her time as assistant coach, she oversaw individual player development for all players and coached the perimeter players. Russell also was active in recruiting.

Before joining the staff at Milligan, Russell served as an assistant coach at Elizabethton High School. From 2012 to 2017, she coached multiple travel teams ranging in age from 12 to 18. Twelve of her former travel team players in that short span went on to play college basketball.

Russell is the Director of High 5 Training, which provides basketball skills development through individual workouts, small group sessions and camp settings. Each year, she collaborates with Navajo coaches to run basketball camps in New Mexico. Russell is also active with sports ministry organizations including Fellowship of Christian Athletes and Crossfire Ministries. She also teaches several sport management classes at Milligan and is the Resident Director of Hart Hall.

Russell played for Milligan from 2011 to 2015. She graduated with honors in exercise science and went on to earn a master’s degree in sport management from East Tennessee State University in 2017. Before playing at Milligan, Kylie enjoyed a successful career as an athlete at Alcoa High School.

Russell is an avid hiker and adventurer and frequently leads hikes and outdoor outings for Milligan students.