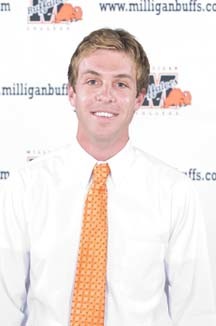 
Ryan Reynolds, a 2007 graduate of Milligan College, returned to his alma mater in 2010 and now enters his fifth season at the helm of the men’s and women’s tennis programs.

Through his first four seasons, Reynolds took the Milligan women to Appalachian Athletic Conference regular season titles three times (2011, 2012, 2014). In 2014, the Buffaloes were AAC regular season and tournament champions, and advanced as far as the NAIA National Championship round of 16 where they were defeated by No. 3 Lindsey Wilson. Milligan ranked No. 13 in the 2014 postseason poll, the highest ranking in the history of the tennis program.

The 2014 season turned out to be yet another memorable year as the Milligan women swept the conference undefeated for the fourth time in the last five years with an overall record of 17-5 (6-0 AAC).

On the men’s side, Reynolds guided the Buffaloes to the 2013 regular season AAC crown, the first regular season championship in the history of the men’s program. In the two seasons leading up to 2013, Reynolds led an individual to the Conference Champions of Character award for promoting good sportsmanship on and off the court.

The men finished the 2014 season with a record of 9-10 overall and a 2-3 conference record. They fell in the second round of the AAC regular season tournament to SCAD Atlanta.

Prior to Milligan, Reynolds served as the assistant men’s tennis coach at NCAA Division I Charlotte. Reynolds helped lead the 49ers to a seventh-place finish in the Atlantic-10 in his inaugural year.

As a Buffalo, Reynolds was a four-time All-AAC selection as well as the AAC Sportsman of the Year during his senior season. As an individual, he was ranked as high as No. 21 in the NAIA polls and served as the team captain his junior and senior seasons.

“Ryan brings a great deal of knowledge and passion to this program,” commented Vice President for Student Development Mark Fox on his hiring. “Having seen him as a student-athlete and following his professional career the last couple of years, I have no doubt that he will bring success to our tennis programs here at Milligan.”

Reynolds, originally from Johnson City, Tennessee, played his three years of high school tennis at local powerhouse, Science Hill. During his stint as a Hilltopper, Reynolds was a part of the 2002 state championship squad and was a three-time All-Big 9 selection. During his senior year, he won the TSSAA AAA state title in boy’s doubles.

“It feels great to come back to my alma mater and have this opportunity to coach,” Reynolds said. “I am really looking forward to beginning my head coaching career at such a great school and continuing the tradition of success Milligan has established.”