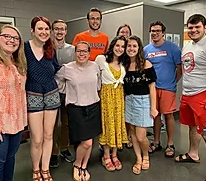 The Spanish major and minor are for all students who want to learn to communicate effectively in any language, think critically about cultures in a globalized world, and obtain gainful employment. Our graduates have continued on to various graduate programs in business, economy, law, medicine including OT and PA programs, and education at top rated schools such as Duke University and University of Tennessee Knoxville. Other graduates have found work in nursing and other medical fields, business, banking, missions, accounting, social work, and education. Adding a major or minor in Spanish can help you stand out and rise to the top of the list of qualified applicants in any job.

Why Spanish at Milligan?

​The Spanish courses at Milligan are interwoven with a variety of disciplines approaching cultural study from a variety of sources including literature, film, and pop-culture. The major is comprised of an 18 hour core that promotes a well-rounded study of the Spanish-speaking world, 15 hours of electives that can be chosen from courses such as Spanish Film or Spanish-American Women Writers, and 3 hours of mentored research tailored to the students specific interests and career goals.

The Spanish program at Milligan promotes a sense of solidarity and belonging. Aside from meals at professors houses or class discussions in coffee shops, there are several events throughout the year to celebrate our language students including the Fall Soup Kitchen, Languages Christmas Caroling, and the Spring Graduates Celebration.

Milligan’s Spanish program was the best part of undergrad. I started off as a pre-med major and quickly decided that I did not want to be a doctor.  Left wondering what to do with the future, I found myself following a degree in Spanish, and I could not have selected a better major. Not only did it allow me to pursue my passion in Spanish with unique courses, but it also allowed me to be flexible enough to get my degree in three years while also pursuing two of my other loves, law and political science. Having a Spanish degree also has helped me in law school. First, it has given me a unique perspective on the law understanding how other countries handle legal situations. Second, it has created new opportunities through immigration law, criminal law, and even consumer bankruptcy and finance! While I have not had the opportunity as several other Milligan graduates to work abroad, I have had the opportunity to work with an underrepresented community in our own community.  I am so excited to see what other opportunities that my degree provides me with as I continue to work on my degree and as I graduate next spring and enter the workforce!”

Why learning a second language is important

Americans are losing out because so few speak a second language

Dr. Allysha Martin serves as Associate Professor of Spanish and Humanities. She holds a B.A. from Union University (2007), an M.A. from Middlebury College (2008), and a Ph.D. from University of Nebraska-Lincoln (2014) in Modern Languages and Literatures with a specialization in Spanish and a graduate certificate of study in Women’s and Gender Studies. Prior to joining Milligan’s faculty, Martin taught Spanish at the University of Nebraska-Lincoln and Union University.

Her research focuses on late twentieth-century Latin American women’s narrative with a focus on the role of consumption.  Martin grew up in Puerto Rico and has lived abroad in China, Mexico, Chile, and Spain.

The Spanish program emphasizes the four language skills of listening, speaking, reading, and writing. While the primary focus is on developing competency in communication, the secondary Spanish licensure program and the Spanish minor provide a foundation in the literature and culture of the Spanish-speaking world.

Graduates may pursue careers in teaching, in translating and interpreting (with additional study), in the tourism and hospitality industry, or in the diplomatic services. Spanish is a valuable asset in international business and in international agencies. In certain regions, Spanish is necessary for elementary and high school teachers of all subject areas and for social service careers.

What can I do with a degree in Spanish?