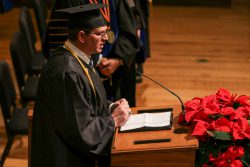 Erwin man graduates from Milligan after over 25-year hiatus

At 47, his wife and two daughters mean the world to him, and he considers Erwin Utilities, where he’s worked in IT for over 18 years, to be as close as family, too.

When he came to Milligan College in Fall 2013 to finish his bachelor’s degree, he was surprised to discover another family—faculty and staff who cared deeply about his success.

“When someone here is helping you, it’s like you’re the only student on campus,” said Smith, who’s from Erwin, Tennessee. “It’s been an awesome experience.”

In addition to his family, as well as his general manager from work, Smith said Milligan’s support system was integral to helping him walk across the college’s fall commencement stage on Friday, along with nearly 100 other graduates. He received a bachelor’s in Computer Information Systems, an online degree designed to give students more flexibility as working adults.

For Smith, it’s been a long wait.

A newly-married sophomore at East Tennessee State University in 1990, Smith decided to postpone his college degree and join the military, where he was then stationed in Germany, along with his wife.

“I have often questioned leaving school when I did,” said Smith. “We’re careful not to ‘what-if’—that’s a dangerous thing to do—but it’s nice not to have that question hanging over my head any longer. This is a goal I’ve had set for myself for a long time.”

But Smith won’t stop at a bachelor’s now.

With a self-described passion for learning and school, he plans to enroll in Milligan’s new Master of Science in Information Systems (MSIS) after it launches in Fall 2018. The program is designed for working professionals seeking leadership positions in the information systems field and is a 14-month online/hybrid program consisting of 10 courses with a maximum residency of five Saturday sessions.

“Steven exemplifies the quality of the students enrolled in our adult programs at Milligan,” said Dr. Carolyn Carter, computer science professor and associate dean of Milligan’s William B. Greene, Jr. School of Business and Technology. “He was a pleasure to have in class and see grow in his skills and profession. We look forward to his returning for our master’s in information systems in the future.​”

Smith said he grew in multiple ways while at Milligan, including enhancing his career-related skillset.

“Every class gives you something,” said Smith. “I learned more about myself, gained more self-confidence and skills, and strengthened my presentation ability. In addition, everything I learned at Milligan helps me help my coworkers—not only moving me forward, but my company, as well.”

The flexibility of the online CIS program and caring faculty weren’t the only reason’s Smith loved his Milligan experience: The Christ-centered education matched his values. Smith serves as a deacon at his church and was asked to give the benediction at commencement. He spoke to his fellow graduates beforehand:

“(We are) blessed to have attended an institution of higher learning which still invites our Lord on campus with open arms and allows Him to move freely,” said Smith. “It has been an honor and a privilege to attend Milligan College and to be mentored by such Fine God-fearing mentors. Part of the purpose of the benediction is to ask a blessing on our graduates, but I would argue we have already been richly blessed.”