DeLong presents on the life of composer Mario Castelnuovo-Tedesco 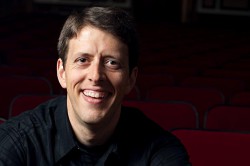 MILLIGAN COLLEGE, Tenn. (September 6, 2017)—Kicking off Milligan College’s 2017-18 Faculty Lecture Series, Associate Professor of Music Dr. Noah DeLong will present on the life and work of composer Mario Castelnuovo-Tedesco (1895-1968) on Monday, Sept. 18, at 7 p.m. in Derthick Lecture Hall, located on the college’s campus. This event is free and open to the public.

This lecture, “Mario Castelnuovo-Tedesco: A Composer Between Two Worlds,” will highlight the composer’s career in Italy and the U.S. and explore ways in which both his native and adopted homelands shaped his music. In addition, DeLong’s presentation will introduce Castelnuovo-Tedesco’s oratorio “The Book of Ruth,” whose themes of deliverance and faith resonate with the composer’s own life circumstances.

“What sparked my interest in Castelnuovo-Tedesco was his wide-ranging career,” said DeLong. “He gained notoriety in his 30s as a composer of opera, concertos, and other orchestral music, while today he is typically remembered for his guitar music and film scores.”

Born to a Jewish family in Florence, Italy, Castelnuovo-Tedesco faced increasing persecution from Italy’s Fascist government toward the end of the 1930s, eventually causing him to immigrate to the U.S.

“Though Castelnuovo-Tedesco’s career took a difficult turn at the hands of the Fascist government in Italy, his story of perseverance remains an inspiration today,” said DeLong.

DeLong is a versatile musician who has found success as a conductor, educator, tenor soloist, collaborative pianist and church musician. He joined the music faculty of Milligan in 2011, where he conducts the Concert Choir, an auditioned choir of 36 singers that regularly tours the U.S. and performs with regional orchestras, and Heritage, a select a capella ensemble.

Posted by Stephen Woodward on September 6, 2017.