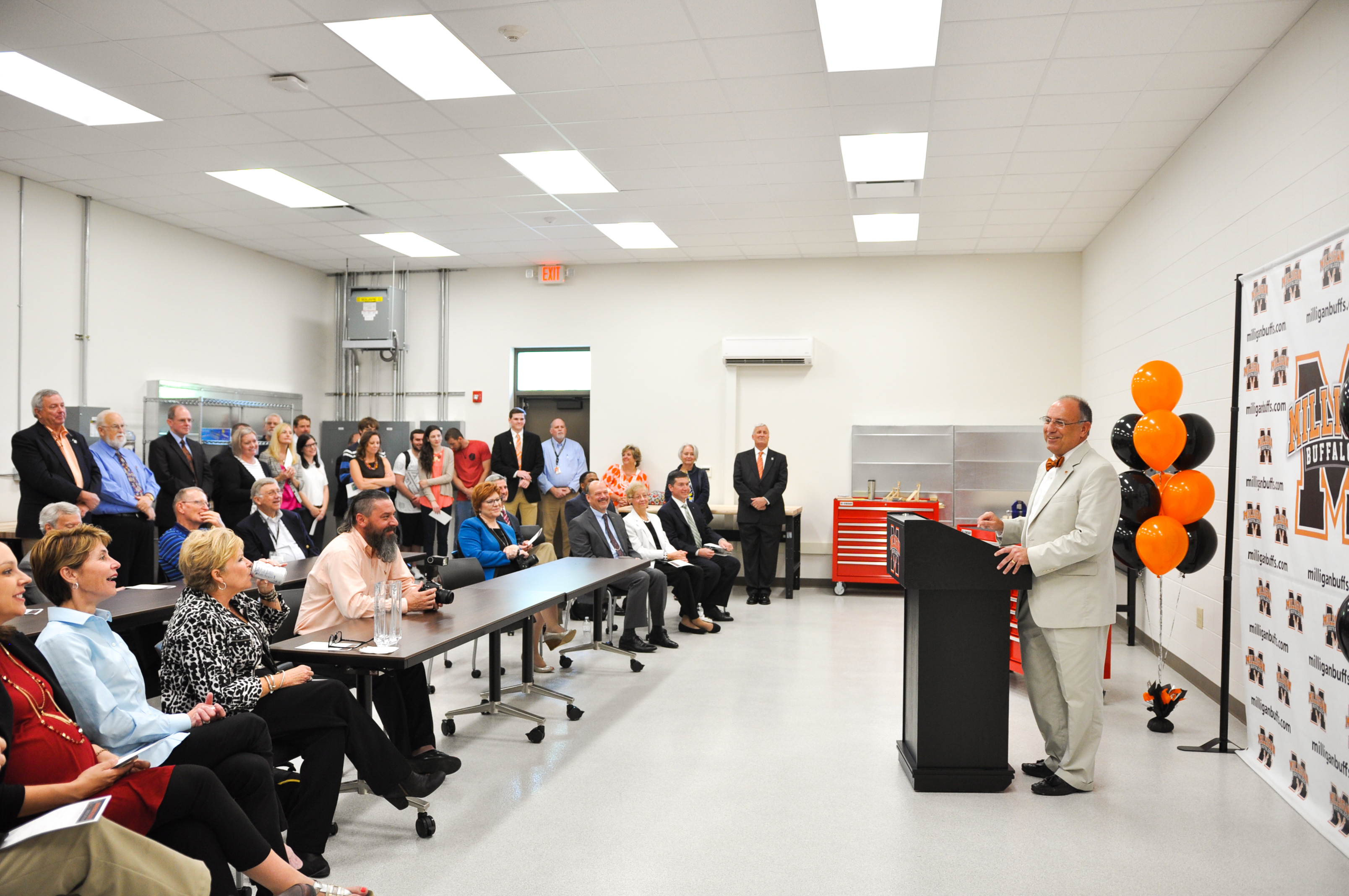 MILLIGAN COLLEGE, Tenn. (April 28, 2017) —Area business leaders and board members joined the Milligan College community today for the dedication of the college’s new engineering facilities, a major component of the college’s recent efforts to expand its academic offerings and another step toward completion of the largest fundraising initiative in the college’s 150-year history.

Greer explained that Milligan began over five years ago to develop its plans to add mechanical and electrical engineering majors in response to both student and corporate interest. The plans included securing the financial, physical and human resources necessary to launch the program with Milligan’s usual high quality standards.

“Today’s dedication is the culmination of those efforts,” said Greer. “We’re grateful for the significant partnerships with these locally-based corporations who have committed significant resources to ensure that our program will produce high quality, ready-to-work engineers. Their commitment to Christian higher education is a testament of their dedication to this region and its people. And we’re very pleased now to dedicate these laboratories in honor of these corporate partners.”

Launched in Fall 2016, the four-year engineering program is fully offered on the Milligan campus in Northeast Tennessee. It is the only such program within a two-hour radius of the Tri-Cities.

“I’ve really been challenged and pushed in this program,” said freshman engineering major Bo Pless, of Elizabethton, Tennessee, who expressed his appreciation of donors and corporate supporters on behalf of the student body during the ceremony. “When you invest in us, you’re investing in people who are going to go out and change the world. Thank you to everyone who’s made that investment. You all are part of something big that God is doing here at Milligan.”

Greer also announced that the college is very close to celebrating the successful completion of its most recent fundraising initiative, “Forward Ever Phase Two.” Since 2007, the college has been working to raise $68 million for its endowment, scholarships, academic support, new programs, campus infrastructure and student housing as part of the two-phased Forward Ever Campaign. Phase One of the campaign, completed in 2011, raised over $28 million. Phase Two is nearing $40 million.

The Milligan engineering majors have been reviewed and approved by our regional accreditor, the Southern Association of Colleges and Schools Commission on Colleges (SACSCOC). Milligan also will be seeking accreditation from the Accreditation Board for Engineering and Technology (ABET). Accordingly, our program has been designed to meet their accreditation standards. Our engineering faculty are experienced leaders in the field and seasoned academicians who have been core faculty members in ABET-accredited programs. Local industry leaders and national corporations have endorsed the program, are offering internships and co-ops, and are eager to hire Milligan engineering graduates. More information on ABET accreditation can be found at www.abet.org.