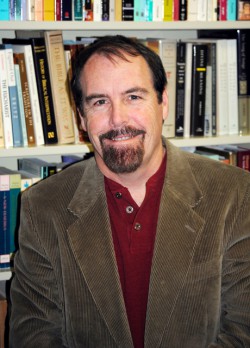 MILLIGAN COLLEGE, Tenn. (March 9, 2017) — A Milligan College seminary professor has been named a 2017-18 Luce Fellow by the Association of Theological Schools (ATS) and The Henry Luce Foundation.

Dr. Paul Blowers, the Dean E. Walker Professor of Church History at Emmanuel Christian Seminary at Milligan, is one of six scholars selected from among faculty at over 270 ATS member schools in the United States and Canada, honored for “creative and innovative” theological research proposals. The fellows will engage in yearlong research in various areas of theological inquiry, finishing with a presentation at the annual Luce Fellows Conference in November 2018.

“Dr. Blowers’ receipt of this prestigious fellowship is indicative of his long-standing commitment to scholarly leadership in the field of church history,” said Dr. Garland Young, vice president for academic affairs at Milligan. “It also is a sign of the rigorous scholarship that has long characterized the entire faculty at Emmanuel. Our students will greatly benefit from Dr. Blowers’ pursuit of this project, and we are grateful that the Association of Theological Schools and the Henry Luce Foundation are supporting his immense scholarly gifts in this way.”

The 2017–2018 Luce Fellows constitute the 24th class of scholars to be appointed since the inception of the program in 1993, bringing the total number of fellows to 160. The program is supported by a grant from The Henry Luce Foundation and was established to identify leading scholars in theological studies, as well as provide them with the necessary financial support and recognition to facilitate their work. Learn more at www.hluce.org.

Blowers has been active in Milligan’s theatre area over the years and cites his long interest in theatrical tragedy and experience playing two tragic characters, Polonius in “Hamlet” (2001) and Teiresias in “Oedipus the King” (2002), as one of the inspirations for his Luce Fellowship research project: “Visions and Faces of the Tragic in Early Christian Literature and Imagination.”

“I have deep interest in how early Christian theologians interpreted certain biblical stories through a ‘tragic’ lens and how this played into their thinking about humanity’s fractured condition and ‘destiny,’—especially their ideas about the providence and justice of God amid abject human suffering,” said Blowers, who joined Emmanuel’s faculty in 1989 and is a scholar of patristics and early Christianity, as well as the Stone-Campbell heritage.

“The Luce grant will allow me the chance to do research in Belgium and England next year, as well as complete a book on these themes,” said Blowers.

Blowers also is an expert on the iconic theologian Maximus the Confessor and, in 2016, published his third book on the subject, “Maximus the Confessor: Jesus Christ and the Transfiguration of the World” (Oxford University Press). A 1977 graduate of Milligan, Blowers holds a Master of Divinity from Emmanuel (’82), as well as a Master of Arts and Doctor of Philosophy (’88) from the University of Notre Dame.