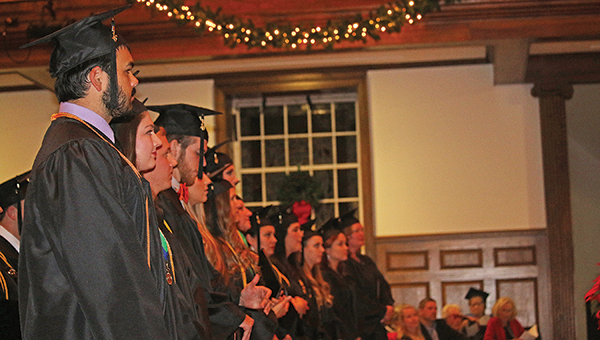 It all started with a dream from Josephus Hopwood and Henry Derthick.

Milligan College, which recently earned national acclaim from a variety of outlets in the country, celebrated
their 150th year of operation on Saturday, Dec. 10, much to the joy of Buffaloes around the country.

After a year of celebration, Milligan College President Dr. Bill Greer shared a moment with the Elizabethton
Star and added that the birthday will be a day of relaxation after over a year of events to recognize the
sesquicentennial.

“We have really partied out,” Dr. Greer said with a laugh. “When we had our homecoming, we pulled out all the
stops. It’ll be a little quiet with everyone gone. But on Sunday, we have asked our supporting churches that are
scattered throughout the country, and the world, to remember us in the morning to acknowledge the birthday
during their services and to pray for the college and our next 150 years. We will be recognizing it that way, there
will also be online recognition on social media for our alumni.”

The last bit of major celebration took place on Friday, Dec. 9, with over 100 students graduating from the
college.

“They are graduating on the last day of our first 150 years,” Dr. Greer said. “December 10th is the day in 1866
that Tennessee charted the Buffalo Male and Female Institute, which we trace our heritage back to. December
Commencement is always a special one. Seeger Chapel is still decorated from our concerts that we had last
weekend, which were stunning and beautiful. We’re proud of all our students that will be graduating.”

During Friday’s Commencement, Dr. Greer dedicated the ceremony to Rachel Reutzel, a 2005 graduate that
recently lost her life in an accident in Ohio. Reutzel was named the Outstanding Senior during 2005, before
attending law school at Ohio State.

Following Commencement, the president did add there is a migration of sorts around the bend.
“We are about to relocate all of our buffaloes back to campus,” Dr. Greer added. “That will be fun. There are
five of those scattered around Kingsport, Johnson City and Elizabethton right now. They have been painted by
different people and placed in different locations for the past year. One is already on campus but we’re going to
bring the five back to campus.

“It is kind of like a buffalo migration,” he continued with a smile. “We’re going to position them along the large
wall behind our new housing village. They’re all going to be “grazing” together … it’ll be an interesting site to
see and a point of interest on campus going forward. We’re very grateful to Burleson Construction for moving
those buffaloes around for us over the past year. They placed them initially for us and moved them midyear. We
appreciate their time and efforts to move the buffaloes.”

As the birthday candles’ fire fades away, the future continues to look bright moving forward, according to the
president.

“We’ll continue to reflect on this for quite awhile,”  Dr. Greer said. “We’re even more excited about the future
holds. Milligan’s best days are ahead. We’ll look at continuing to grow and diversify but remain true to our roots
as a Christian liberal arts college.”