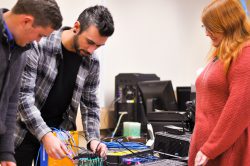 Another flurry of key taps, then “enter.”

The bundle of inexpensive Raspberry Pi (RPi) microcomputers, harnessed together by a group of Milligan computer science students leading up to “Computer Science Education Week” (Dec. 5-11), instantly runs an extraordinarily complex math problem, resulting in more than a few “oohs” and “awws” from the college’s “Hardware Fundamentals” class. The credit card-sized RPi is similar to smartphone processors and can be used for basic computing, programming and even robotics.

“An average personal computer would take several seconds to process this, but like a team of horses, we multiplied the Raspberry Pi’s computer power by connecting them together,” said Dr. Teresa Carter, professor of computer science at Milligan. “The beauty of this project is that it teaches my students to manipulate systems. Any of them could write programs through code, but knowing how to manipulate systems using a programming language makes them valuable in the job field.”

Other students in the class agreed.

“The project seemed daunting at first, but it’s beneficial to learn all of this,” said senior Ben Yep, of Chicago, Illinois. “It opens up creativity.”

“By thinking outside the box, students have the opportunity to explore areas out of their comfort zone which fosters confidence in their critical thinking skills,” said Carter.

Minor, of Johnson City, Tennessee, served as lead programmer on Milligan’s RPi project and said they were inspired by a similar project at another college.

“We made it more accessible,” said Minor.

Carter said that the increased accessibility will allow high school students to try their hands at programming RPi computers at Milligan’s summer camps next year.

But for someone as skilled in computer science as Minor (he’s a self-taught programmer, starting at the age of 10), the RPi is a blank canvas for his creativity.

“If you can dream it, you can build it,” said Minor about programming. “There’s no limit as to what you can do.”

After transferring from Northeast State Community College to finish his bachelor’s at Milligan, Minor said Carter has become a great mentor for him on his way to become a professional programmer.

“With the small class size, you learn so much more,” Minor said about Milligan. “You’re here to excel at a career.”

Posted by Stephen Woodward on December 6, 2016.