A! MAGAZINE: All That Jazz: Rick Simerly 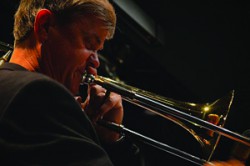 By Leslie Grace, A! Magazine

“Jazz is restless. It won’t stay put, and it never will,” J. J. Johnson

Rick Simerly of Milligan College has been compared by The Online Trombone Journal to J. J. Johnson, one of the great trombone jazz musicians, saying “when jazz fans think about great trombone players, only a few names come to mind: J.J. Johnson, Steve Turre, or maybe Bill Watrous. Soon jazz fans will be praising the slide horn of Rick Simerly.”

Primarily, Simerly performs outside of the area. “Most all of my performances are outside this area. I’m in North Carolina, Virginia, South Carolina and occasionally Georgia. Probably the closest is Asheville, North Carolina, where there is quite an accomplished jazz community.

“I spend most of my summers performing and teaching at various venues and jazz camps throughout the U.S. This summer was my 20th year as a faculty member of Jamey Aebersold’s Summer Jazz Workshops, which are probably the premier jazz camps in the U.S. I’ve also taught at the Dave Brubeck Institute in Stockton, California and am often in Ohio and South Carolina.

“As far as this area goes, there is jazz every Thursday night at Wellington’s in Johnson City. Due to the efforts of guitarist Bill Perkins, different jazz groups perform there every Thursday night from 8-10. I usually do one performance a month as a quartet. In my opinion as a performer and jazz educator, if you truly love this genre of music, it is important to support jazz in this area.”

Simerly says he had a fantastic band director, Bill Scott, who got him started in jazz. “Bill is a great musician and a dear friend. I perform practically all styles of jazz from New Orleans to post-bop.”

He says that what interests him most about jazz is “it’s a challenging genre of music that gives you the freedom to put your personal stamp on the music. Instead of interpreting music that someone composed 300 years ago, improvisation allows me to actually create the music and interpret it in my own personal way. It’s challenging and dictates a necessity to continually practice and maintain and improve on the proficiency skills that you possess. One of my favorite quotes by Wynton Marsalis is: “… in classical music the goal is mastery of your instrument. In jazz it’s the starting point.'”

As an associate professor of music at Milligan College, Simerly teaches jazz ensemble, jazz combo, jazz history, jazz improvisation, brass choir, secondary methods, brass methods, world music, survey of pop music, advanced conducting, applied brass lessons and many more. He does not teach privately outside of the college but conducts workshops and master classes at various colleges and universities throughout the U.S. “I am very proud of our music program at Milligan,” he says.

The Milligan Jazz Ensemble performs Nov. 23 with special guest Noel Freidline, pianist and vocalist. Freidline is the former house pianist at the Bellagio in Las Vegas and has performed at jazz festivals throughout the U.S. “He is an extraordinary jazz pianist and vocalist, and we will be playing a lot of Michael Buble and Frank Sinatra charts,” Simerly says. “I will be in Hickory, North Carolina, on Dec. 13 performing with Freidline. Next fall we will have a very special concert celebrating the 150th anniversary of Milligan College with some remarkable musicians that I will be bringing in from all parts of the U.S.”

While Simerly directs ensembles that play different types of music and sometimes plays shows or backs up singers in different genres, he spends most of his practice and performance time on jazz.

He has two recordings, “Obscurity” and “Simple/Complexity,” both of which have received rave reviews. His solo CD, “Simple/Complexity,” has been described as a “…chop busting display…” by Cadence Magazine, “a virtual dissertation of the trombone” by trombonist Buddy Morrow, and the late J.J. Johnson said “It is quite impressive. You should be proud.”

His latest CD, “Obscurity,” features Eric Alexander, David Hazeltine, Lynn Seaton, Steve Davis and Scott Wendholt. The International Trombone Journal says “… there is nothing obscure about Rick Simerly’s talent and ability – he is an awesome jazz voice. He could be a “poster child’ for the Downbeat Magazine classification – Talent Deserving of More Recognition. “Obscurity’ is well paced, well produced and very well done.”

“I’m a proud advocate of America’s music, jazz,” Simerly says. “It is the only true art form that was born here in the United States. It is a musical genre that is all about the essence of the music. It doesn’t rely on gimmickry or visual effects to be judged. Today’s music is as much a visual presentation as an aural one. What matters in jazz are the notes that come out of the instrument or voice, not about the pyrotechnics or dance moves. Consequently, it is a genre that doesn’t have a lot of room for mediocrity.”

Mediocrity is not likely to be a term associated with Simerly, whom David Baker, leader of the Smithsonian Jazz Masterworks Orchestra, described as “one of the most exciting and consistently creative trombonists in jazz today.” Jamey Aebersold says he is “an astounding player with fantastic range and a keen sense of developing a solo. His playing takes you on musical journeys and each one is different and exciting.”

If you’d like to accompany Simerly on a musical journey, his next appearance at Wellington’s in Johnson City, Tennesseee, is Dec. 10. He performs a traditional Christmas jazz concert at The Coffee Company in Elizabethton, Tennessee, Dec. 12.