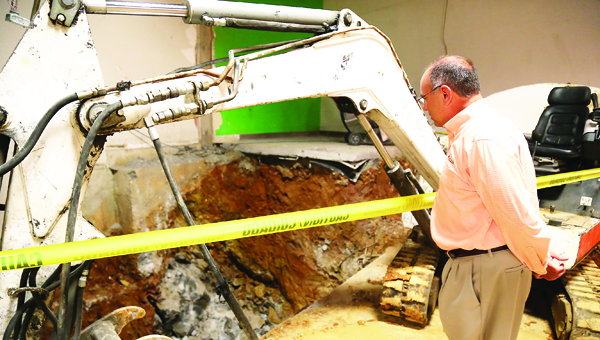 This article original appeared in the Elizabethton Star on July 26, 2015.

Since June, the science building has received some attention with various upgrades. Then the ceremony welcoming Emmanuel Christian Seminary as a part of Milligan College initiated the B.D. Phillips Memorial Building renovation the following Monday.

“That really was a turning point for these projects,” Milligan College President William Greer said. “We now just need to think of the Milligan College side of Milligan Highway and the Emmanuel Christian Seminary side of the highway as now all one campus.”

Once serving as an auditorium, the plan is to construct engineering labs in the downstairs portion of the B.D. Phillips Memorial Building. An elevator shaft is being carved out and a hallway will be constructed. There will be four laboratories tailored to each engineering program track — mechanical and electrical.

“Our goal is to help continue both the Emmanuel programs that have gone on for 50 years, but also to have space for some important new programs that Milligan has wanted to launch for a while,” Greer said.

The renovations are made possible by a number of individual and corporate donors that are excited to see the addition of this program at Milligan, Greer said.

“We’re pleased at how many corporations have stepped up with interest in internships and co-op spots, scholarship dollars and just overall support,” Greer said. “They are very hungry for engineers. There’s not another engineering program particularly in mechanical and electrical engineering for quite a distance. This will set us apart.”

Greer asks the community to not glance over the importance of the graduate physicians assistant program.

The addition of this program prompted the science building renovations. It doesn’t solely benefit the new program. It benefits all students studying science. Students going into engineering will also be taking more science classes, too, Greer said.

“We were also able to use some of the funding to renovate the science building,” Greer said. “It’s needed it for quite a while. We’re happy to be able to do that. It will be better suited for today’s equipment or students needs.”

Updates to the science building include new lighting and work station fixtures, resurfacing and upcycling of work stations, fresh paint on walls and ceilings and new flooring and plumbing.

“That’s in chemistry, biology and physics,” Greer said. “There’s also a gross anatomy lab in that building. It is expanding. Gross anatomy is where we have cadavers for our masters in occupational therapy program and we will use them for our physicians assistant program. We will have room for more work stations.”

Milligan has a little bit of time before the projects need to be finished.

“We hope to start engineering at the start of 2016,” he said. “The physicians assistant program could either come in the summer of fall of 2017.”

Greer was unable to say when they plan to have both renovation projects completed.

“We’ve been ready to go,” Greer said. “The exciting part is that we are now making progress physically on renovations and upgrades that we have wanted to do.”