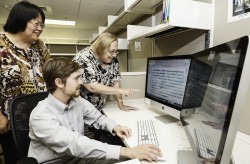 MILLIGAN COLLEGE, Tenn. (March 13, 2015) — To most people, a singular grape might seem ordinary, boring even—another piece of fruit in the grocery aisle.

Last summer, Sterling Herron, a senior at Milligan College, learned that a grape can be so much more.

Deep in the urban hustle-and-bustle of Washington, D.C., Herron was tasked with solving the mystery of a simple, yet mysterious natural wonder: the Concord grape.

“It’s a widespread commercial grape, yet no one knows where it came from,” said Herron, who moved from Orlando, Florida, to Butler, Tennessee, when he was 10 years old.
Herron wasn’t on his own, of course. He had the vast resources of the Smithsonian’s botany research lab at his disposal and the guidance of two research scientists and curators, Dr. Jun Wen and Dr. Elizabeth Zimmer.

The mission? Compare different DNA sequences to track down the genetic parents of the Concord grape, which was developed in 1849 by Ephraim Wales Bull in Concord, Massachusetts.

“It was overwhelming,” said Herron, describing the moment when he first walked into the research lab. While he hadn’t taken a genetics class at Milligan yet, Herron said that his previous science classes at the college helped him prepare for this moment.

Wen managed to get Concord grape samples from the original plant still growing in a private property in Massachusetts and a cutting of the original plant growing at the Welches Grape Juice Company, which gave the duo a starting point. The project also sampled many accessions of grape species from both North America and Eurasia.
At the time, Herron didn’t realize the Smithsonian was such a large research institution. Their museums stand as cultural icons on the National Mall. He got a backstage glimpse of the more obscure items in the Smithsonian’s collection, notably a gorilla preserved in alcohol and a mammoth pelt.

Raised and homeschooled in the middle of the woods, Herron nurtured a deep passion for science and botany at a young age, which eventually developed into a small business called Nature Labs, which sells jewelweed soap that helps treat poison ivy.

While he experienced the initial culture-shock of going from the small, tight-knit community of Milligan to living in the big city, Herron eventually began to love the community of fellow interns he met while at the Smithsonian.

“You’ll probably hear about them doing great things someday,” said Herron, who plans to get his doctorate in the field of biology.

In 10 weeks, however, Herron already accomplished great things. A mere week before he left to return home, he and Wen made a scientific breakthrough in the genetic history of the Concord grape, tracing the genealogy back to its origins. They plan to publish the results this year in a scientific journal.

Herron encouraged Milligan students to apply for internships that might seem out of reach. “Just because Milligan is a small community does not mean we can’t dream big and go for lofty goals,” said Herron. “I did not expect to be doing a research internship at the Smithsonian, but I made it. It was an experience I will never forget.”

While he learned a lot about the Concord grape and life working at a big research institution, Herron also realized something greater that will apply to the rest of his life.

“There is a whole wealth of knowledge that we haven’t tapped into yet,” said Herron, “and it’s just waiting to be explored.”

For students interested in turning their science passion into reality, check out Milligan’s new engineering program launching in fall 2016. Find out more at www.milligan.edu/engineering.

Be the first to hear all new details about the program at the inaugural “Engineering Buff” Day on Friday, March 20. For more information or to register, call 800.262.8337, email the campus visit coordinator at visits@milligan.edu or visit www.milligan.edu/buffday.