Milligan teams up with churches for special performance of ‘Messiah’ 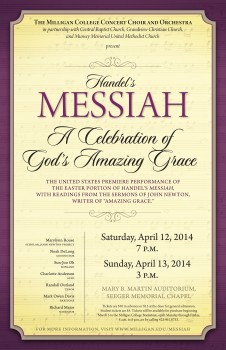 This performance, which is the United States premiere of “Handel’s ‘Messiah’: A Celebration of God’s Amazing Grace,” covers the story of Jesus’ passion. It intersperses dramatic readings from the sermons of John Newton with the Easter portions of Handel’s “Messiah” in a beautiful concert that will draw audiences to the powerful message of God’s amazing grace.

The original concept comes from a 2010 performance at the Gloucester Cathedral, given under the auspices of the John Newton Project. John Newton, a contemporary of Handel and the writer of “Amazing Grace,” preached more than 50 sermons from every biblical text in Handel’s “Messiah.”  The Project’s objective is the transformation of society through faith in Jesus Christ, using the life and works of John Newton as one great example.

In addition, Marylynn Rouse, a British scholar with the John Newton Project, will be on hand to introduce each performance and to give several lectures in the week leading up to the concerts.

“We had longed to see others take up the idea of using Handel’s ‘Messiah’ in combination with Newton’s sermons,” said Rouse. “It is a great joy to share with Milligan College and local churches in using this as an outreach for the gospel and broadening awareness of the great truths of Jesus the Messiah, by combining musical skills with Newton’s rich biblical expositions of the words.”

“One of the exciting aspects of this project is the opportunity to collaborate with so many musicians from our region,” said Noah DeLong, assistant professor of music at Milligan. “After our first rehearsal with the combined chorus, I was struck not only by the wonderful sound that such a large group can make, but also by the moving spirit of Christian unity that was evident among these servants who faithfully participate in various music ministries.”

On Tuesday, April 8, Rouse will give two lectures with more information on the background of John Newton and his sermons on Handel’s “Messiah.” The first lecture will be during Milligan’s convocation at 11 a.m. in the Mary B. Martin Auditorium of Seeger Memorial Chapel and the second will be at 7 p.m. in Hyder Auditorium, located in Milligan’s science building.