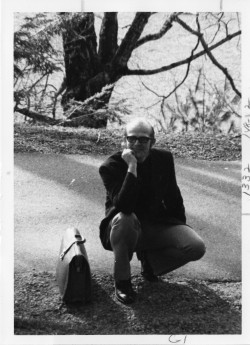 I was a student of Dr. Dibble’s 24 years ago.  That first class turned into three more and eventually turned me into an English major and now an English professor, a transition I can assure you would not have happened if I had not taken that class.  Though my becoming a professor technically made me his peer, I was never ever to make the transition to calling Dr. Dibble by his first name.  Like many students, whenever I have talked about him to other people, I have simply called him Dibble.  I mean no disrespect by dropping the Dr., of course.  In fact, I use his last name because of something he told me years ago.

When I was applying for graduate school in English, I knew I wanted Dibble to write a letter of recommendation for me, but I was worried about asking him.  It’s not that I thought he would say something awful—he was quite supportive in what he wrote, as I later found out—or that he would turn me down.  No, I was worried for two other reasons.

First, I thought he would forget to send it.  I had seen his office enough to worry that the forms just might get lost.  I had also been his advisee during a semester when he forgot to turn in our chapel attendance, leaving us all to explain to our parents that, yes, we were attending chapel.

Second, I wasn’t sure he even knew my first name, as I had never heard him use it.  In class, he called us all by our last names, often slapping or thumping the desk before calling on us—“Brown!  What do you think about that?”  When I confessed to him later that I didn’t think he knew my name, he explained to me that where he was from—both in terms of time and place—using someone’s last name was a mark of respect; using the first name was taking a liberty he did not assume.

In my first class with Dibble after I had become an English major, American Literature I, I was having trouble making the transition to upper-level English courses.  I had not been a particularly strong student in English, changing my major from both math and Bible mainly because I wanted to be more like Dibble and I had no idea what else I would do, so I often found myself lost in class.  Unfortunately, I was often not smart enough to realize this, so I would simply argue with him.  When we were discussing Walt Whitman, we came to the part in “Song of Myself” where he is discussing his view of the afterlife, the pleasant view of death Whitman had:

I bequeath myself to the dirt to grow from the grass I love,
If you want me again look for me under your boot-soles

You will hardly know who I am or what I mean,
But I shall be good health to you nevertheless,
And filter and fibre your blood.

Failing to fetch me at first keep encouraged,
Missing me one place search another,
I stop somewhere waiting for you. (74 in Norton vol. C)

I was rather angry about this passage, and I said, probably too loudly, “How does he know?  He wasn’t dead when he wrote this, so how could he know?”  Dibble responded calmly, “You ask me how I know he lives?”  He knew I knew that hymn and that I had, until just that semester, been a Bible major.  With one line from one hymn he reminded me that there are different kinds of faith, that Whitman had his faith, just as I had mine.  I responded, much more kindly than it now sounds, “Just shut up and teach the class.”  And he did, of course.

What took me a long time to learn is that Dibble didn’t want us to think like he did.  He didn’t want to try to convince us to share his view of the world.  One of my peers knew the effect Dibble had had on my major choice and was having on my life, so when I bought a pair of sandals to wear, much as he did, she began referring to me as a Dibblite.  That was probably true, and I was not the only one to join the sect.  However, there was no creed, no ten commandments that he wanted to instill in us beyond that of the oracle at Delphi:  “Know thyself.”  He knew I didn’t understand Whitman, and he knew that I didn’t understand Whitman because I didn’t understand myself, so he kept pushing me to do so.

The next fall, I and several of my friends were in his Contemporary Literature course, probably no more than 9 or so of us on the second floor of Derthick.  We were studying Joseph Conrad’s Heart of Darkness—and we just went with the fact that we were studying a novel from 1900 in a class called Contemporary Literature—when he was trying to lay some ground work for our discussion.  He was pointing out a passage from early in the novel, but he only got partway through it before stopping:  “The sun set; the dusk fell on the stream, and lights began to appear along the shore. The Chapman light-house…”  He threw his head back and began laughing, slapping the desk, and muttering under his breath—“That sneaky…”; “I can’t believe he…”  We sat in the back of the room looking at each other, wondering what was wrong with him.  When he finally calmed down, he explained:  “Chapman’s lighthouse?”  We said nothing.  He tried again, “Keats?”  In one of the only two moments I was able to figure something out before he completely explained it, I said, “Keats’s poem ‘On First Looking Into Chapman’s Homer’.”  What had happened was that he had seen something in Conrad’s work, a work he had read and taught at least twenty times by then, that he had never seen before. 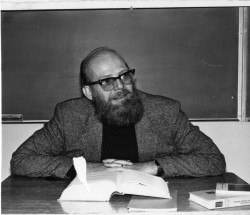 We were able to witness him discovering something for the first time, and it showed us the joy he took in learning.  He treated Conrad like a long-time friend who had been playing a practical joke on him for all of these years, and he had just now gotten it.  He wanted to make sure we got it, as well.  It wasn’t about simply finding connections for the sake of doing so for Dibble; it was for the joy he found when he felt he was participating in this centuries-long discussion that is literature and learning.  He wanted us to know what that was like, so he showed us whenever he could.

Two years before, I had been forced to take Sophomore Humanities.  I didn’t want to take the class just as I had not wanted to take Freshman Humanities.  I didn’t want to take any courses that involved significant reading and, to be honest, thinking.  Also, to be completely honest, I hated Dibble for the entire first semester.  I would not have taken him for the second half of the course, but I had little choice.  Whether you want to ascribe it to the hand of God or Providence or fate or chance or simply the fact that Milligan had us register in alphabetical order in the fall and the reverse for the spring, leaving me to register last, I had to choose between taking his course for the second time or taking an 8 o’clock class, and we know which will win out there.  For some reason, one day during that second semester, we ended up discussing Adam and Eve.  I have no idea what the assigned reading was, nor how we had gotten around to talking about Adam and Eve, but that happened on such a regular basis that students learned to take whatever subject came around. 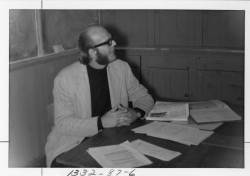 He asked what sounded like a simple question:  “Why were Adam and Eve kicked out of the garden.”  I was a Bible major; I had played Bible Bowl; I knew the answer to this question, and I told him, “They disobeyed God.”  He said, “Are you sure God didn’t kick them out because he was worried they would become like him?”  I said that I was quite sure of that.  He actually didn’t argue with me at that time; he simply suggested I read the end of Genesis 3, where it is written, “And the LORD God said, ‘The man has now become like one of us, knowing good and evil. He must not be allowed to reach out his hand and take also from the tree of life and eat, and live forever.’  So the LORD God banished him from the Garden of Eden to work the ground from which he had been taken.”  Now, this might sound as if he were trying to be heretical or cause me to question my faith, but I don’t think he was, nor did I think that at the time.  Instead, he wanted to ask students challenging questions and push them to find answers for themselves.  He wanted us to know why we believed what we did, not just take somebody else’s word for it, including his.  That’s the only way we come to know ourselves, after all.

When I talked to him about teaching last summer, he described his style of teaching by comparing it with another style, which he called stake-and-chain teaching.  He said that some people treat education like keeping a dog in the backyard.  You put down a stake, attach the dog’s chain to it, and the dog can run around in a large circle, but go no further.  He said he viewed learning like a clearing.  His job was to show the students this open space and help them learn to explore it.  Not only that, though, he also wanted them to know that there was even more beyond that clearing that they could look into when they were finished here.  He wanted us to explore as much as we could.

The Whitman passage I read earlier begins, “I bequeath myself to the dirt to grow from the grass I love,/If you want me again look for me under your boot-soles.”  I have not, nor will I now, look for Dibble in the grass beneath my boot-soles.  I will look for him in the leaves of books, not leaves of grass.  Every time I teach Whitman, I remember that ideas matter, that who we are and how we know ourselves matters.  Every time I teach Conrad, I remember his joy at learning, the joy that those of us he taught hope to pass along.  Every time I teach, I remember that there are ideas beyond the stake and chain, even beyond the clearing he showed so many of us.

When I walk into my classroom, he is still there, sitting at his desk.  I can hear him slapping or thumping it, calling out, “Brown!  What do you think about that?”  What do I think?  I think he changed my life and the lives of so many.  We know where we can always find him.

CategoriesArchives, Articles
Posted by on September 26, 2013.