At 100, Johnson Citian Dennis Helsabeck has plenty of stories to share 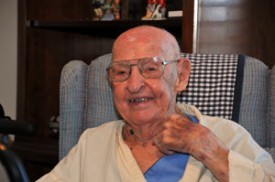 From Charles Lindbergh to Eleanor Roosevelt to Ronald Reagan and more, Johnson City’s Dennis Helsabeck, who turns 100 today, has met a lot of interesting people in his century on this planet.

Those are just a few of the notable people he has met. But besides meeting notable figures in American history, Helsabeck has been all over the world, including Australia, New Zealand, Europe and Africa. He has been to 23 countries in all.

He said his plans for his centennial mark were to simply, “Do what I’m told.

A celebration was held for Helsabeck on Sunday at Grandview Christian Church, where he attends.

Helsabeck now lives in Appalachian Christian Village. He still has his drivers’s licence but lets his son, Dennis Helsabeck Jr., do all the driving.

But he always enjoyed traveling and did as much as possible after retiring from Milligan College in 1978. He taught psychology and counseling.

“You learn something from every trip you make,” he said. “Travel is a good educational deal.”

He lived a year in New Zealand after retirement, giving time to a church that had no minister.

“It’s a wonderful country to live in, just great people,” he said of New Zealand. “I served a small church. I could get all of the work done nearly in one day that needed to be done, so I got to do quite a bit of traveling while I was down there.”

He has been all over Europe. He has even been in Israel and Jordan, too.

“Palestine’s an interesting country,” he said. “And it was great because in bible college and seminary I had studied about all these places, and it was great to be able to say this is where Jesus stood when he taught such and such a lesson.”

Helsabeck’s father was a minister for 52 years who graduated from a college in Lexington, Ky., in 1891. Helsabeck was born in a small town in south central Ohio on Dec. 17, 1912. The family moved to Roanoke, Va., when he was small and then to a place called Tobaccoville, N.C., which is about 12 miles outside Winston-Salem.

He grew up on a farm there through grade school and high school.

“It was an old family farm that my grandfather had,” Helsabeck said. “It was about 180 acres. We had a couple of tenant farmers who came and did most of the work, of course, we all worked on the farm.

“You worked on the farm day and night,” he said. “Everybody had their job. I kept the wood boxes filled so we could have heat, and worked with the animals that we had on the farm. It was an enjoyable period of life for me.”

His father inspired his ministerial career, he said.

Helsabeck went to what was then Johnson Bible College in Knoxville in 1930 and really enjoyed it. He graduated from there in 1934.

He also has a master’s degree in education from the University of Michigan and a seminary degree from Butler University.

He also got a doctorate from the University of Wisconsin.

Helsabeck began preaching in High Point, N.C., where he stayed for nine years. Then he was a minister in Indiana while working on his seminary degree. He was there eight years. He then spent some years in Wisconsin as a minister.

In 1930, two weeks before the Great Depression really hit hard and the banks all closed, he entered Johnson Bible College.

“It took us 12 hours to drive from North Carolina — all the roads were dirt from Winston-Salem to Knoxville — so you didn’t do it every day,” he said.

Anyway, when the banks closed, what little money he or anyone else had saved was tied up.

“It was quite an interesting time to go to school. We ate beans and cornbread, that kind of food, all four years that I went to school down there,” he said.

During the summers he worked as a minister with the church in High Point.

He met many presidents during his lifetime, including Gerald Ford, Jimmy Carter and Ronald Reagan, but his memory of national politics stretches back pretty far.

“My first recognition of a president was Woodrow Wilson,” Helsabeck said.

Eleanor Roosevelt was one of the United Nations’ first delegates. It was during this time that Helsabeck met her.

He was with a group of young people attending the United Nations. Roosevelt visited this group.

“She invited about six of us over to her apartment and served us tea,” he said. “We had a nice visit. We talked about her husband and the Great Depression that he went through.”

He sat behind Jimmy Carter in church once.

Sometime in the early 1990s he was traveling through Georgia. He had heard where Carter attended church and stopped in there for services while passing through.

“They took very active part in the service, singing and so forth,” Helsabeck said. “But when the service was over, the preacher said, ‘Well, now make yourselves acquainted with each other.’ My wife, at that time, she walked out of the pew behind him and she said, ‘Can I hug a president?’ And he said, ‘You can if I can hug you.’ ”

In the 1920s Helsabeck went to see Charles Lindbergh land in Richmond, Va., while taking a trip with his cousin, because he never “turned down any trips.”

He was around 15 at the time, and though he did not realize it, his future second wife was also at that event. They discovered this in the 1960s when they met again as adults at Milligan.

His first wife died of cancer at age 43. His first wife was named Nellie Mae and his second wife was Eleanor, who also went by the nickname “Cookie.”

So what would he say if asked for advice?

“I’d say to them, get an education and give your life in some kind of service that’s above and beyond just making money,” he said. “Because I’ve known a lot of people who made a lot of money who weren’t very happy.”