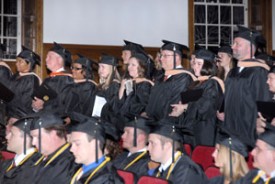 MILLIGAN COLLEGE — With Milligan College’s Mary B. Martin Auditorium in Seeger Memorial Chapel decorated in honor of the Christmas season with garland, red bows and candles along its perimeter, the scene set the perfect backdrop for the college’s Friday night commencement ceremony.

At exactly 7 p.m., the 101 degree-seeking graduates, faculty and administrators entered the chapel where family and friends greeted them with smiles, waves and flashes from cameras.

Among those receiving their bachelor of science degrees was Jay Armel, whose ties with Milligan date back around 30 years.

Armel started as a freshman at Milligan in August 1978 with a goal of playing baseball.

After injuring an ankle, he left Milligan and from that point he said simply “life happened.”

Armel then tried two more semesters at Eastern Christian College in Bel Air, Md., before he got married and then had two daughters.

Working as a real estate agent in his home base of Hickory, N.C., he said he decided to come back and finish what he started.

“I’ve put two daughters through college, a wife through college and about 18 months ago, I decided it was time for me to go back and finish. I’ve been commuting from Hickory, N.C., over here every Thursday for the last 16 months,” Armel said.

He said changes in the market and wanting to improve his skills to better himself inspired him to get back to his education.

Starting back was not exactly an easy transition for him. Just three weeks into his program, Armel was diagnosed with late stage two, early stage three type B lymphoma.

“Besides going to class, I was going through (chemotherapy) and radiation,” he said.

“It’s never too late,” he said. “There’s nothing in life that can keep you from achieving your dreams, except yourself and your … inhibition.”

David Martin, who received his master’s in business administration degree Friday night, said that when he graduated from the University of Tennessee in 1989 he assumed his collegiate days were behind him.

College came knocking again when his employers at the Mayo Clinic in Jacksonville, Fla., requested he work on his M.B.A.

While scouting out programs, the Northeast Tennessee native set his sights on Milligan.

“It was very challenging for me to get used to how you use the chat rooms and all those types of things in a learning environment. The professors were really … accommodating and helpful in making that transition for me, because it was a true transition to learn how to do that and learn how to navigate the world of the Internet as you try to learn,” he said. “The really neat thing about this program was the real-world experience that each and every professor had. They were able to bring that type of working knowledge to us.”

Martin said his time at Milligan was enjoyable, with the added bonus of visiting with his parents while in town every fifth weekend.

“It was challenging, but it was rewarding in the same token,” he said.

Receiving her master’s of science in occupational therapy, Lydia Marshall said her time at Milligan has come to an end.

Originally from Charlottesville, Va., Marshall fell in love with Milligan while attending a Christ In Youth church camp six years ago and decided to go straight onto graduate school after completing her undergraduate degree.

Marshall said she has enjoyed her time at Milligan.

“Awesome school. (I) wouldn’t trade my experience for the world,” she said.
Read the original article.