Photo by Brandon Hicks - Freshman student Malissa Allie is one of numerous students who participated in the Welshimer Library’s 2nd Annual Edible Books event. Students were invited to submit their votes for the funniest or punniest, most creative, most book-like and overall champion. The edible book event is an international program designed to promote reading.

Milligan’s Research and Instructional Librarian Mary Jackson said the international program has been sponsored by numerous libraries and archives across the globe over the past several years.

Students, faculty, staff and their immediate family members were encouraged to enter the contest that requires them to create a completely edible representation of a book. “The only rule that we have is that their entry must be totally edible. We’ve had contestants enter everything from cookies to cakes,” Jackson said.

This year’s contestants were inspired by a wide range of different books, such as Dr. Seuss to The Hunger Games by Suzanne Collins. “Some of our contestants took a more conventional approach and created an edible book based on the cover, while others took more of a punny or funny approach,” Jackson noted.

On Monday, a special display was set up at the library to allow students, faculty and staff to view the entries. They were asked to submit their vote for their favorite submission by voting in four categories. Jackson said, “The four categories are: the punniest or funniest, the most creative, the most book-like and what you could call the overall winner or grand champion.”

She added that the competition has been very competitive this year and numerous people participated by dropping off a vote for their favorite edible book.

While Jackson said last year’s contest had good participation, most people weren’t aware of it. She commented that they had 23 entries this year, with 24 people assisting with the design and creation of their edible books. 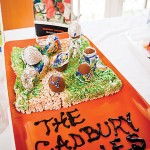 Photo by Brandon Hicks – Students, faculty and staff at Milligan College participated in the school’s 2nd Annual Edible Book Contest. The program, which was held at the P.H. Welshimer Memorial Library, is an internationally- sponsored event at libraries and archives throughout the globe. In this entry “The Canterbury Tales” is changed to “The Cadbury Tales” and incorporates Cadbury chocolate eggs to complete the pun. 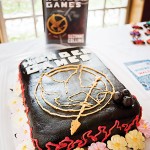 Photo by Brandon Hicks – Taking advantage of the recent popularity of the novel and movie, “The Hunger Games” by Suzanne Collins, this entry in Milligan College’s 2nd Annual Edible Books event was one of the most well-received entries in the contest. In order to compete, students, faculty and staff members were required to submit a completely edible representation of a book or novel. 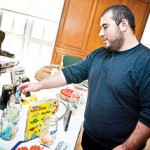 Photo by Brandon Hicks – Milligan College sophomore Marshall Werbiski of Brownsville, Texas casts a vote Monday afternoon for one of the entries in the 2nd Annual Edible Books contest. The contest requires students, faculty or staff members to submit an edible dish representing a novel or book. The contest, which was sponsored by the P.H. Welshimer Memorial Library, received 23 unique entries from a total of 24 different individuals. 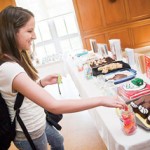 Photo by Brandon Hicks – Freshman student Malissa Allie is one of numerous students who participated in the Welshimer Library’s 2nd Annual Edible Books event. Students were invited to submit their votes for the funniest or punniest, most creative, most book-like and overall champion. The edible book event is an international program designed to promote reading.