Milligan president to retire next year 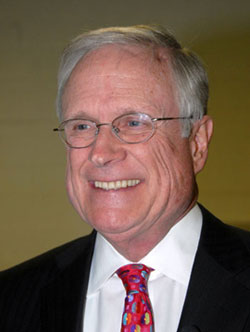 MILLIGAN COLLEGE — Referencing Bible verses from Ecclesiastes in saying there is a time for everything, Milligan College President Don Jeanes announced to the campus Thursday it will be time for him to step down next summer, nearly 14 years after becoming the 14th leader of the 144-year-old Christian liberal arts school.

Holding back emotions at one point, Jeanes made the announcement in Seeger Memorial Chapel during Thursday morning’s student chapel service. Jeanes intends to retire from the presidency July 15. Milligan’s Board of Trustees had been preparing for Jeanes retirement since this past April when he told them he intended to step down soon. The board will immediately begin the process of selecting a new president. An announcement regarding the next president should be made by April.

“Certainly, it is my prayer that God will continue to bless Milligan College,” Jeanes said after his announcement.

Jeanes said his passion for Milligan was too great to completely leave the school, so he will take on the position of chancellor for at least one year following his retirement, a role that will see him fundraising and conducting public relations.

During Jeanes’ time as president, the school grew past the 1,000-student mark, three new buildings were constructed on campus including the new Gregory Center for the arts, six new academic programs were begun and the school’s endowment grew from about $5 million to around $16 million. Still, Jeanes said he had hoped to do more.

“I had really hoped that I could get started on a new residential village,” Jeanes said. “I had also hoped that the resources would have been forthcoming to have the companion building to the Gregory Center. It would be a student center.”

Despite increasing the endowment by more than 200 percent, Jeanes said he wished it was more.

“That’s not much, especially if you compare with some other schools,” Jeanes said. “The endowment’s important to the future of the college.”

Jeanes joked that it was good, though, to leave something for the next president to do.

Jeanes said Milligan was in a good position to continue growing in programs and enrollment, citing the school’s recent addition of an off-site MBA program at Walters State Community College in Morristown.

“We’re looking at opportunities in the region to expand our off-site programs,” Jeanes said. “I think if we can provide the facilities, our campus will continue to grow, because I think Milligan is a good value.”

Jeanes said the next president could possibly see Milligan’s enrollment double from its current record size.

“I’m not going to set a goal for somebody but I could see us very easily in three or four years being over 2,000,” Jeanes said. “I just think that’s a reality and not a pipe dream.”

Asked if he would ever fully retire Jeanes said probably not, because he is too full of energy. He said that was one reason the board suggested the chancellor position for him.

“I don’t know if I’ll ever sit down,” Jeanes said. “I think I’ll always be doing something as long as I’m physically able, and I think I’m able.”

A native of Georgia, Jeanes graduated from Milligan in 1968. He served as director of financial aid and assistant business manager at Milligan while attending Emmanuel School of Religion, where he received his master of divinity degree in 1972. He then served on the faculty and administration of Atlanta Christian College and completed doctoral coursework at Emory University.