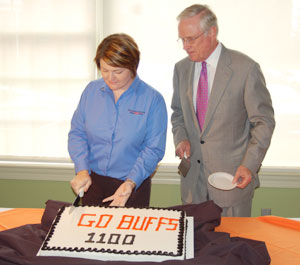 MILLIGAN COLLEGE, TN (Aug. 31, 2009) — Milligan College President Don Jeanes announced today that the college will set a record fall enrollment for the third year in a row, with 1,102 students, a jump of 76 students over last year.

This announcement comes on the heels of Milligan being named a “Best Buy” and one of the Top 10 best baccalaureate colleges in the South by U.S. News & World Report last week. Two weeks ago the college also was recognized among the top 15 percent of colleges in the U.S. as a “Military Friendly School” by G. I. Jobs magazine.

“We continue to stay true to our mission and commitment to academic quality,” said Jeanes. “Those things are valued now more than ever.”

Jeanes said this year’s record enrollment is credited largely to a new student class of 319 traditional undergraduate students, the largest class since 1969 and a 29% increase over last year.

Jeanes is also pleased that the college’s academic profile continues to be strong for new students, meaning that the college has not sacrificed quality for growth. This year’s freshman class has an average high school GPA of 3.6 and an ACT score of 23, both well above national and state averages and consistent with recent entering classes.

Milligan has seen steady enrollment growth in the past decade from new academic and athletic programs, stronger retention among upperclassmen, and growth in graduate and adult degree completion programs. This, combined with more strategic recruitment and marketing initiatives, contributed to the recent growth, explained Jeanes.

“As we look to the future, we see a growing need for graduates like those from Milligan. In order to meet that need, we must continue to allow for some expansion. So we have a target enrollment in mind of 1,200 to 1,500 students. This allows the college to maintain its personality and stay true to its mission as a Christian liberal arts college. We’re excited about this year and the future of Milligan,” said Jeanes, who has been president at the Christian liberal arts college since 1997.

Milligan has 831 undergraduate students, 201 in its three graduate programs, and 70 in adult degree-completion programs enrolled this fall. Fall classes began Aug. 19. Final enrollment numbers will be issued Sept. 2 by the college’s Registrar’s Office.